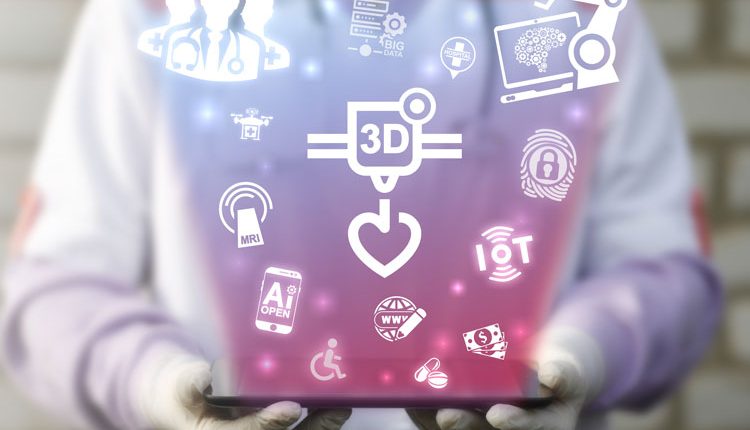 Embark on the quest to 3D print surrogate human tissue

Surgeons often use 3D printers to make intricate anatomical copies of body parts. So it makes sense that they also use them to visualize what they will see and decide how to proceed before actual surgery.

However, it is quite another thing to 3D print nonbiological parts that mimic the actual physical properties of human tissue.

Researchers at the Southwest Research Institute now are tackling the challenge.

As well as common printing materials to produce a surrogate of the hard bone and soft muscular tissue of the cervical spine.

“The ultimate goal is to replace human surrogate material for research with a nonbiological, artificial object that represents some structure of the body,” he said.

“It would be reusable, and nonbiological-based so there are no safety concerns as with human tissue, and easy to use.”

Research into musculoskeletal injury depends mostly on either human surrogates or cadavers.

Both are pricey and in limited supply.

Cadavers are widely used but present problems with procuring, storing, preparing, and disposing, all of which increase costs.

Surrogates don’t have those issues and using them eliminates any concerns about safety.

However, they are expensive and mostly produced for specific cases, making them unsuitable for multiple uses.

Perhaps most significantly, their sturdiness makes it difficult to accurately replicate specific actions of the human body.

Eliason was intrigued by the possibility of printing surrogate tissue while working on another additive manufacturing project.

“This was all really very new for us,” he said.

Eliason chose the cervical spine simply because the institute had worked with the parts.

But it wasn’t easy to print, he said, because of the intricacies of the internal structure.

“There’s a lot of unsupported overhang (in vertebrae). When you print you lay down material on top of what has been printed, so there was a lot of support material. That was difficult in getting it to print.”

Coupons were tested in tension using an electromechanical test frame.

The test results determined the optimum combination of material and printing settings to produce a structure mimicking ligament and disc properties of a cadaver identified in literature.

Eliason said the test results were a good first step in eventually manufacturing tissue that mimics human muscles and bone.

They were manufactured using three off-the-shelf flexible materials and a hobby-type printer, and still succeeded in validating proof of concept:

By using multiple materials and varying print parameters and structure, surrogate ligaments can be printed that closely match material properties of cadaveric tissues.

After printing the bone structures, the ligaments can be fitted to create functional anatomical structures that closely mimic biomechanical behavior of those from a cadaver.

The next steps are two-fold, Eliason said. The first is to use more advanced printers and software for the next phase.

He sees a lot of promise in polyjet printing, which spreads material similar to an ink-jet printer and cures the printed material with ultraviolet lights.

“The benefit is that you can blend materials on the fly to get a whole spectrum of multiple properties,” he said.

The second is more challenging.

Develop new material to more closely match structural and biomechanical properties of human tissue, an area of study with a limited amount of research to refer to, Eliason said.

“We’ve seen a lot of 3D printing in the medical field to visualize body parts,” he said.

“But we’ve not seen anything to get the material properties correct. That’s the difficult part, getting the correct biomedical behavior of soft tissue, so that it not only looks like a cervical spine but behaves like one.”

Eliason thinks the key to advancing the project lies in material science and design of a new material beginning with the internal structure.

“Some kind of metamaterial,” he said.

SWI researchers are intrigued by the design of a 3D printed door handle that does not have moving parts.

The door lock transforms the rotary movement of the handle into the linear motion of the latch.

Developed by the Hasso-Plattner Institut in Potsdam, the system is based on shearing-wall technology.

The key to the metamaterial mechanism is a specialized type of cell, the only ability of which is to shear.

New ideas for the future

Unlike the rigid cell, this shear cell is designed to deform when a force is applied, more specifically to shear, which allows for controlled directional movement,” according to the institute.

“You design cells to collapse under shear. Certain cells collapse so you get movement just by design.”

That could be the way to design surrogate muscle tissue.

The idea in mimicking a tendon is to design the same behavior in the microstructure of a printed part, holding tension but buckling under compression, with an interlocking or shear-collapsing structure.

That’s still in the future. Researchers are looking for improvements in printer resolution to accommodate the microstructure needed to get the necessary behavior.

Until then, cadaver tissue will remain the standard in surrogate tissues.

Nine milestones in the history of killer robots