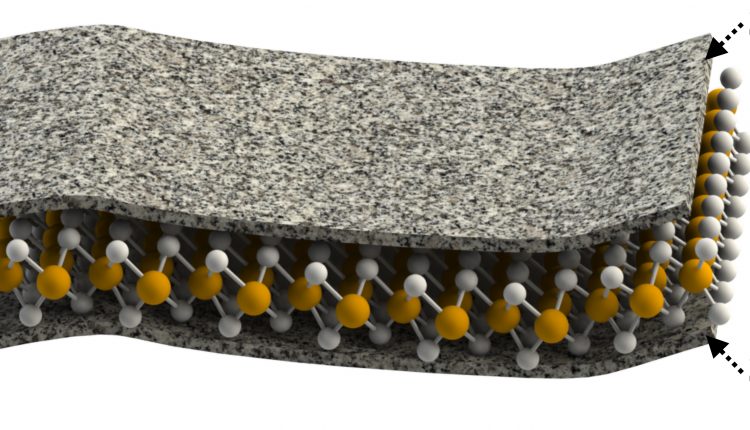 The key to better cellphones and other rechargeable electronics may be in tiny “sandwiches” made of nanosheets, according to mechanical engineering research from Kansas State University.

Gurpreet Singh, assistant professor of mechanical and nuclear engineering, and his research team are improving rechargeable lithium-ion batteries. The team has focused on the lithium cycling of molybdenum disulfide, or MoS2, sheets, which Singh describes as a “sandwich” of one molybdenum atom between two sulfur atoms.

In the latest research, the team has found that silicon carbonitride-wrapped molybdenum disulfide sheets show improved stability as a battery electrode with little capacity fading.

In this latest publication, Singh’s team observed that molybdenum disulfide sheets store more than twice as much lithium — or charge — than bulk molybdenum disulfide reported in previous studies. The researchers also found that the high lithium capacity of these sheets does not last long and drops after five charging cycles.

“This kind of behavior is similar to a lithium-sulfur type of battery, which uses sulfur as one of its electrodes,” Singh said. “Sulfur is notoriously famous for forming intermediate polysulfides that dissolve in the organic electrolyte of the battery, which leads to capacity fading. We believe that the capacity drop observed in molybdenum disulfide sheets is also due to loss of sulfur into the electrolyte.”

To reduce the dissolution of sulfur-based products into the electrolyte, the researchers wrapped the molybdenum disulfide sheets with a few layers of a ceramic called silicon carbonitride, or SiCN. The ceramic is a high-temperature, glassy material prepared by heating liquid silicon-based polymers and has much higher chemical resistance toward the liquid electrolyte, Singh said.

“The silicon carbonitride-wrapped molybdenum disulfide sheets show stable cycling of lithium-ions irrespective of whether the battery electrode is on copper foil-traditional method or as a self-supporting flexible paper as in bendable batteries,” Singh said.

After the reactions, the research team also dissembled and observed the cells under the electron microscope, which provided evidence that the silicon carbonitride protected against mechanical and chemical degradation with liquid organic electrolyte.

Singh and his team now want to better understand how the molybdenum disulfide cells might behave in an everyday electronic device — such as a cellphone — that is recharged hundreds of times. The researchers will continue to test the molybdenum disulfide cells during recharging cycles to have more data to analyze and to better understand how to improve rechargeable batteries.

Other research by Singh’s team may help improve high temperature coatings for aerospace and defense. The engineers are developing a coating material to protect electrode materials against harsh conditions, such as turbine blades and metals subjected to intense heat.

“This was quite surprising because both silicon carbonitride and boron nitride are insulators and have little reversible capacity for lithium-ions,” Singh said. “Further analysis showed that the electrical conductivity improved because of the formation of a percolation network of carbon atoms known as ‘free carbon’ that is present in the silicon carbonitride ceramic phase. This occurs only when boron nitride sheets are added to silicon carbonitride precursor in its liquid polymeric phase before curing is achieved.”

For both projects, the researchers have received support from the National Science Foundation.