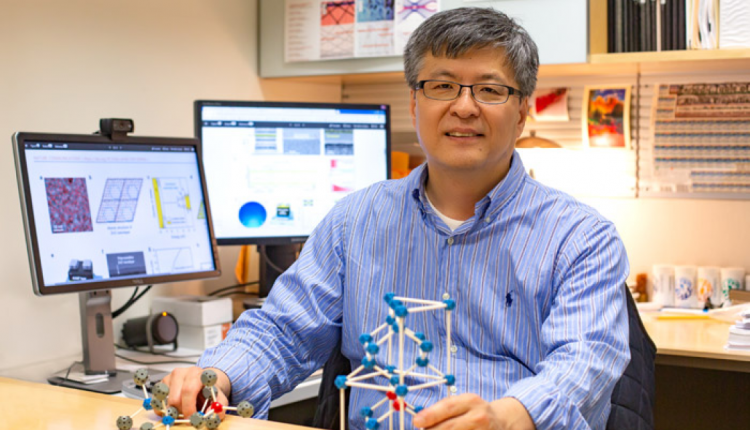 Demand for electronic processing power to run smaller and more powerful devices has meant that transistors, the tiny electrical switches that transmit information, have had to shrink as well.

Scientists’ pursuit of the smallest possible transistor has allowed more of them to be packed onto each chip. But that race to the bottom is almost over. Researchers are fast approaching the physical minimum for transistor size, with recent models down to about 10 nanometers—or just 30 atoms—wide.

Through theory, design and simulations, Dr. Kyeongjae Cho, professor of materials science and engineering, and his UT Dallas collaborators have developed the fundamental physics of a multi-value logic transistor based on zinc oxide, while their collaborators in South Korea successfully fabricated and evaluated the performance of a prototype device.

Cho’s device is capable of two electronically stable and reliable intermediate states between 0 and 1, boosting the number of logic values per transistor from two to three or four.

Cho said the new research is significant not only because the technology is compatible with existing computer-chip configurations, but also because it could bridge a gap between today’s computers and quantum computers, the potential next landmark in computing power.

“The processing power of electronic devices comes from the hundreds of millions, or billions, of transistors that are interconnected on a single computer chip,” said Dr. Cho. “But we are rapidly approaching the lower limits of scale.”

In a quest for faster processing speed, the microelectronics industry has been looking for alternative technologies and Cho’s research, published online April 30 in the journal Nature Communications, might offer a solution by expanding the vocabulary of the transistor, allowing them to convey more information values. Existing transistors are basically switches that are either on or off and translate into the 1s and 0s of binary language.

But processing capacity could be increased without adding more transistors by increasing the amount and type of information each transistor conveys by introducing intermediate states between the on and off states of binary devices. A so-called multi-value logic transistor based on this principle would allow more operations and a larger amount of information to be processed in a single device.

While a conventional computer uses the precise values of 1s and 0s to make calculations, the fundamental logic units of a quantum computer are more fluid, with values that can exist as a combination of 1s and 0s at the same time or anywhere in between. Although they have yet to be realized commercially, large-scale quantum computers are theorized to be able to store more information and solve certain problems much faster than current computers.

“A device incorporating multi-level logic would be faster than a conventional computer because it would operate with more than just binary logic units. With quantum units, you have continuous values,” Cho said.

The technology Cho and his colleagues developed uses a novel configuration of two forms of zinc oxide combined to form a composite nanolayer, which is then incorporated with layers of other materials in a superlattice.

The researchers discovered they could achieve the physics needed for multi-value logic by embedding zinc oxide crystals, called quantum dots, into amorphous zinc oxide. The atoms comprising an amorphous solid are not as rigidly ordered as they are in crystalline solids and form a composite nanolayer in a new type of transistor.

“By engineering this material, we found that we could create a new electronic structure that enabled this multi-level logic behavior,” said Cho, who has applied for a patent. “Zinc oxide is a well-known material that tends to form both crystalline solids and amorphous solids, so it was an obvious choice to start with, but it may not be the best material. Our next step will look at how universal this behavior is among other materials as we try to optimize the technology. Moving forward, I also want to see how we might interface this technology with a quantum device.”

“The transistor is a very mature technology, and quantum computers are nowhere close to being commercialized,” he continued. “There is a huge gap. So how do we move from one to the other? We need some kind of evolutionary pathway, a bridging technology between binary and infinite degrees of freedom. Our work is still based on existing device technology, so it is not as revolutionary as quantum computing, but it is evolving toward that direction.”