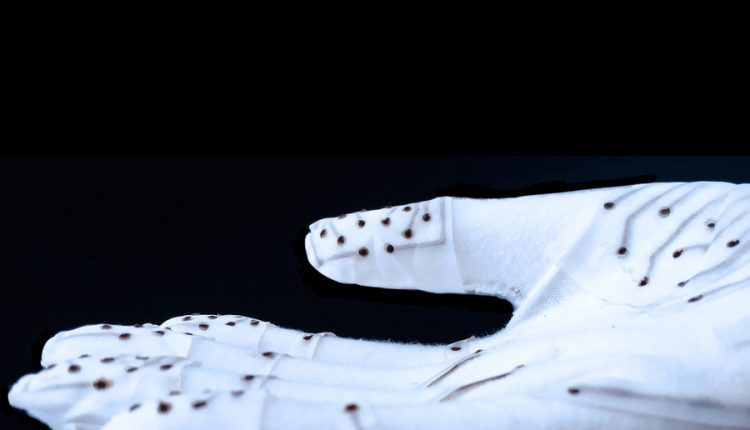 Researchers at MIT led the design of a glove that could help stroke victims regain motor function and also enhance virtual reality and gaming experiences. The engineers involved created a way to precisely measure and map the subtleties of tactile dexterity.

The touch-sensing glove “feels” pressure and other tactile stimuli via a system of sensors inside the glove that detects, measures, and maps small changes in pressure. The sensors are highly attuned and pick up very weak vibrations across the skin.

The team envisions integrating the pressure sensors not only into tactile gloves but also into flexible adhesives to track pulse, blood pressure, and other vital signs more accurately than smart watches and other wearable monitors.

The glove’s pressure sensors are similar to humidity sensors—small capacitors, with two electrodes, or metal plates, sandwiching a rubbery “dielectric” material that shuttles electric charges between the two electrodes. In the case of the glove, when a sensor is squeezed, the balance of charges in its dielectric layer shifts, in a way that can be measured and converted to pressure. But the dielectric layer in most pressure sensors is relatively bulky, limiting their sensitivity.

The research team did away with the conventional dielectric layer in favor of human sweat that naturally contains sodium and chloride ions that could serve as dielectric stand-ins.

The team fabricated thin, kernel-sized sensing electrodes lined with thousands of gold microscopic filaments, or “micropillars,” and demonstrated that they could accurately measure the degree to which groups of micropillars bent in response to various forces and pressures. They applied the concepts of their new, micropillared pressure sensor to the design of a highly sensitive tactile glove. They started with a silk glove, which the team purchased off the shelf. To make pressure sensors, they cut out small squares from carbon cloth, a textile that is composed of many thin filaments similar to micropillars.

They turned each cloth square into a sensing electrode by spraying it with gold, a naturally conductive metal. They then glued the cloth electrodes to various parts of the glove’s inner lining, including the fingertips and palms, and threaded conductive fibers throughout the glove to connect each electrode to the glove’s wrist, where the researchers glued a control electrode.

Genes in Space winner’s experiment to launch to ISS