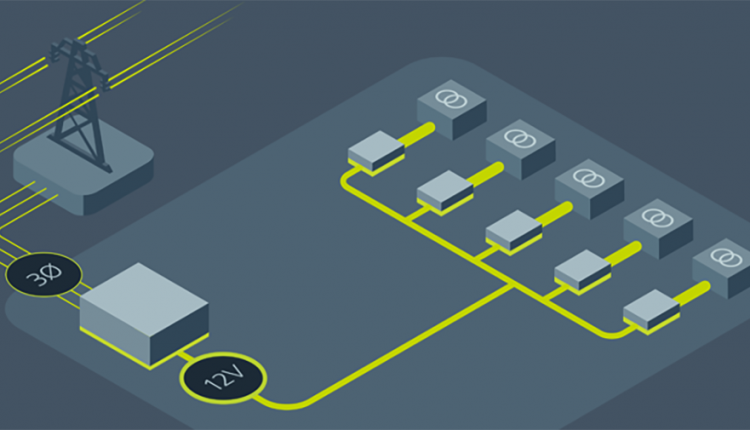 Every electronic piece of equipment or system has a power delivery network (PDN) made up of cables, bus bars, connectors, circuit board copper power planes and AC-to-DC and DC-to-DC converters and regulators.

Governing the performance of a PDN is its overall architecture, such as the use of AC or DC voltage distribution, specific voltage and current levels and when and how many times the network needs voltage conversion and regulation.

Many PDNs have been standardized in specific industries over many years, such as 270V and 28V in the defense and aerospace industry, the negative 48V used in communications infrastructure applications and the 12V PDN used in automobiles — which then became a standard in computer servers and industrial applications. As a result, billion-dollar industries were built around standard PDNs.

Significant disruption occurs when a standard PDN can no longer keep up with the demands in system power. Along with this disruption comes an enormous opportunity for power system designers to innovate PDNs based on a new standard such as 48V, which is now emerging in the hybrid vehicle, data center, artificial intelligence (AI) accelerator card, lighting and unmanned vehicle industries.

As industries transition to new PDNs, there are many opportunities to substantially improve performance with non-traditional power delivery architectures and technologies.

The Function of a PDN

The PDN is designed to provide specific levels of voltage and current to the various loads within a system derived from a bulk power source(s). It must do so under steady-state and peak conditions and under specific low-to-high temperature ranges. As power makes its journey from the source to the load, the PDN’s performance is measured in terms of power loss, its physical size, weight and cost.

‘Advanced systems with their ever- increasing number of loads and load power, pose complex design challenges for achieving high performance when the PDN is based on 12 volts.’

Advanced systems in enterprise and high-performance computing, communications and network infrastructure, autonomous vehicles and numerous transportation applications are just a few of the high-growth industries clamoring for more power.

These systems with their ever-increasing number of loads and load power, pose complex design challenges for achieving high performance when the PDN is based on 12 volts. Incorporating higher voltages to a PDN has tremendous challenges and there are good reasons to resist change. In some cases, vast ecosystems have been built over decades to support industries’ 12V PDNs.

Major semiconductor, connector and cabling industries and companies have been built around the supply of components for 12-volt DC networks. This power delivery network emerged in the 1960s in the automobile market. After vehicles quickly exceeded the power that a 6V battery could provide, the PDN changed to 12V, by initially using two 6V batteries connected in series.

As 12 volts became the standard in high-volume passenger cars, 12-volt PDN components quickly commoditized to what is now a multi-billion-dollar market with significant barriers to entry. The mass availability of 12-volt components drove the 12-volt standard into industrial and computer server markets, while the truck market drove a 24V standard into higher-power industrial applications.

This quick history demonstrates the evolution and development of higher-performing PDNs when system power levels increase and dictate change. Supply chain requirements of cost, multi-sourcing and risk create resistance to changing the PDN. However, this resistance can become a limiting factor in system performance and maintaining a competitive advantage.

The Emergence of 48V

The telecommunications industry has been using a 48V PDN for decades. 48V was the best option because:

As communications networking infrastructure grew in complexity with the advent of the Internet, laptops and mobile phones, leveraging the existing 48V PDN infrastructure to power new equipment made a great deal of sense. However, powering the many new and complex loads consisting of arrays of network processors, memory and control system loads from 48V posed a challenge because the bulk of the available technologies were centered on 12V capabilities with semiconductor converters and regulator components optimized for this operating voltage.

To solve this 48V-to-12V problem, an architecture called Intermediate Bus Architecture (IBA) was deployed and quickly became the de facto standard in communications and network infrastructure applications. The type of bus converters used are non-regulated fixed-ratio 1:4 isolated devices and built on an open-frame package that met DOSA and POLA pinout standards to enable multi-sourcing. Isolation was not a safety requirement for the SELV IBA because positive battery terminals were tied to ground to stop galvanic corrosion, resulting

in a negative 48V voltage. By using an isolated fixed-ratio bus converter as a DC-DC transformer, a –48V input can be used to deliver a +12V output for the downstream point-of-load (PoL) regulators.

Power system engineers spend a great deal of time architecting and optimizing power delivery networks to deliver high system performance and reliability. If the system load power is high, designing bulk power delivery with a higher voltage for the intermediate bus reduces the current (I = P/V) the voltage drops (V = I • R) and the power losses (PLOSS = I2R) which reduces the size, weight and cost (cables, bus bars, connectors, motherboard cop- per power planes) of the PDN.

Architecting the system to maximize the length of the higher-voltage runs before converting down to lower voltages and higher currents is a big advantage.

Every industry (and application) is different, but standardization around a specific PDN voltage or architecture such as IBA can restrict improving the performance of a PDN. Most often, the need to excel and gain a competitive advantage through new features and functions drive changes to a PDN. For example, advanced applications such as artificial intelligence (AI) in data centers are driving the move from 12V to 48V PDNs and away from IBA to new architectures.

The significant rise in processor and associated server-rack power levels have simply exceeded what 12V can deliver.

For the automotive market, the need to meet regulatory standards that required a reduction of CO2 emissions in vehicles was a catalyst to explore vehicle electrification. Regulatory pressure combined with a demand for higher vehicle performance has resulted in the emergence of 48V batteries to sup- port new mild-hybrid powertrains, safety system and entertainment system designs.

In large LED-display systems, the classic problem of long cable runs, higher power and the need for SELV has made 48V PDNs the standard in this emerging industry.

Many 12V PDNs are designed with a very simple dual structure of AC-to-12V and then 12V-to-PoL. In the case of 12V battery power sources, bulk 12V power distribution feeds 12V PoL converters and regulators.

With the advent of higher system power requirements, PDNs based on 380V and 48V are more complex as many industries are still trying to retain legacy 12V PDN infrastructure at the point-of-load. Additional PDN challenges come in the form of new high-voltage bulk power sources such as 800V batteries in electric vehicle (EV) and high-performance vehicles.

In these new systems and applications, the PDN can be broken down into three basic segments:

The addition of the extra 48-to-12V conversion step is an added cost with additional power, efficiency and board-space loss. However, the advantages of high-voltage power delivery to the PDN and the overall power savings associated with a high-voltage PDN outweigh the extra

conversion-step losses. Furthermore, there are alternative topologies, architectures and modular power solutions for direct 48V-to-load conversion and regulation that enable the best of both worlds.

The opportunities for innovating bulk power conversion to an intermediate 48V PDN lie in the following areas:

As power levels continue to rise, the challenges on a bulk power system design get increasingly more complex. Managing the size and weight of the bulk power converter and cooling it due to higher power losses are the primary areas of focus in the majority of applications. If size and weight is not an issue then very high efficiency can be achieved and thermal management can be achieved with fan cooling.

If the bulk power source is AC or high-voltage DC, isolation is required. An isolation stage adds power loss in any converter, but regulation may not be necessary if the intermediate-bus PDN contains regulation for the PoL stage (i.e., 48-to-12V). The two considerations for this approach are:

Another approach for capitalizing on the high-power density and efficiency of a fixed-ratio converter to improve the size and weight of a large bulk power converter is to use it as the conversion and isolation stage function where the PFC and regulation is done by a preliminary stage. he fixed ratio converter is easily paralleled to deliver very high power due to the positive temperature coefficient of the BCM’s output impedance.

Data centers and exascale computing commonly require maximum processing power in a confined space, so they benefit greatly from high-density component and advanced cooling techniques. In some cases, full-immersion cooling is being implemented where the entire server is placed in a bath of Fluorinert. Alternatively, other high-performance computing applications are using cooling techniques with heat-pipe and cold plate technologies. In these applications a low-profile planar package is required for the power-conversion and regulation stages of the bulk power system.

The opportunities for innovating 48V intermediate bus PDNs lie in the following areas:

Moving from a 12V intermediate bus PDN to a 48V PDN presents some challenges but also offers significant advantages. Extending the 48V runs to be as close as physically possible to the PoL regulators will reduce power cable connector and PCB copper power plane, size, weight and cost. PoL space constraints are often problematic, so the converter needs to have a high‑power density and efficiency.

A non-isolated fixed-ratio bus converter is the best option as long as the PoL regulators can handle the voltage variation on their input which is determined by the voltage input range to the bus converter divided by the turns-ratio or K factor (VIN/K = VOUT). If the bulk power converter is designed with reasonable regulation tolerances, then this design approach is both feasible and advantageous.

For designs where the bulk power converter or bulk power source (such as a 48V battery) has a wide output voltage range, regulated DC-DC converters may be required depending on the PoL regulator input voltage specification. Adding regulation to the 48-to-12V stage reduces the efficiency of the converter by 2 to 4% depending on its topology. Regulation also reduces overall power density and in- creases the thermal management challenge of handling power losses in very high-power applications. Finding a regulated 48-to-12V converter with high efficiency and power density in a thermally-adept package is the best option.

But to really advance the PDN design with significantly improved performance and high current density at the PoL, a new architecture to consider is the Vicor Factorized Power Architecture (FPA). With FPA, a new type of converter called a current multiplier, capable of direct 48V-to-load voltage conversion with high efficiency and density, is placed very close to the load. In high-current applications this is very advantageous as it reduces the PDN impedance from the converter to the load which can be a source of very high-power losses and also impact di/dt transient performance.

Progress, advancement and innovation invariably require new thinking, new ideas and new approaches. As your business requirements change, be open to possibilities. Exploring and researching alternatives can be rewarding in many ways.

COVID-19 Warnings Were on Twitter Well Before Pandemic Outbreak