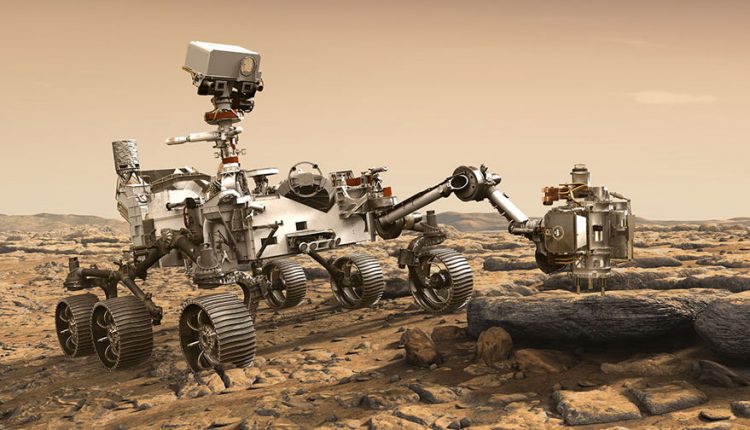 Are we alone? Mars 2020 Rover Mission searches for life

In just a few years, NASA’s next Mars rover mission will be flying to the Red Planet. Differently from its predecessor, the Curiosity Mars rover, it has seven new instruments, redesigned wheels and more autonomy.

A drill will capture rock cores, while a caching system with a miniature robotic arm will seal up these samples.

Afterwards, they’ll be deposited on the Martian surface for possible pickup by a future mission.

NASA’s Jet Propulsion Laboratory, Pasadena, California, which manages the mission for the agency, developed the hardware.

It includes the mission’s cruise stage, which will fly the rover through space, and the descent stage, a ‘sky crane’ that will lower it to the planet’s surface.

Both of these stages have recently moved into JPL’s Spacecraft Assembly Facility.

Mars 2020 relies on the system designs and spare hardware previously created for Mars Science Laboratory’s Curiosity rover, which landed in 2012.

Roughly 85% of the new rover’s mass is based on this ‘heritage hardware’.

Despite its similarities to Mars Science Laboratory, the mission has very different goals.

Mars 2020’s instruments will seek signs of ancient life by studying terrain that is now inhospitable, but once held flowing rivers and lakes, more than 3.5 billion years ago.

To achieve these goals, the rover has a suite of science instruments.

It will seek out biosignatures on a microbial scale.

An X-ray spectrometer will target spots, while an ultraviolet laser will detect the ‘glow’ from excited rings of carbon atoms.

A ground-penetrating radar will be the first instrument to look under the surface of Mars, mapping layers of rock, water and ice up to 30ft deep.

The rover will receive an upgraded Curiosity hardware, including color cameras, a zoom lens and a laser that can vaporize rocks and soil to analyze their chemistry.

The mission will also undertake a marathon sample hunt.

The rover team will try to drill at least 20 rock cores, and possibly as many as 30 or 40, for possible future return to Earth.

“Whether life ever existed beyond Earth is one of the grand questions humans seek to answer,” said Ken Farley of JPL, Mars 2020’s project scientist.

“What we learn from the samples collected during this mission has the potential to address whether we’re alone in the universe.”

As the descent stage approaches the Martian surface, it will use computer vision to compare the landscape with pre-loaded terrain maps.

This technology will guide the descent stage to safe landing sites, correcting its course along the way.

A related technology called the range trigger will use location and velocity to determine when to fire the spacecraft’s parachute. That change will narrow the landing ellipse by more than 50%.

This approach to minimizing landing errors will help guide any future mission dedicated to retrieving the Mars 2020 samples.

Site selection has been another milestone for the mission.

In February, the science community narrowed the list of potential landing sites from eight to three.

Those three remaining sites represent different environments that could have harbored primitive life:

All three sites have rich geology and may potentially harbor signs of past microbial life.

A final landing site decision is still more than a year away.

In a bit of a jam? Relax, this EV prototype will sort you out