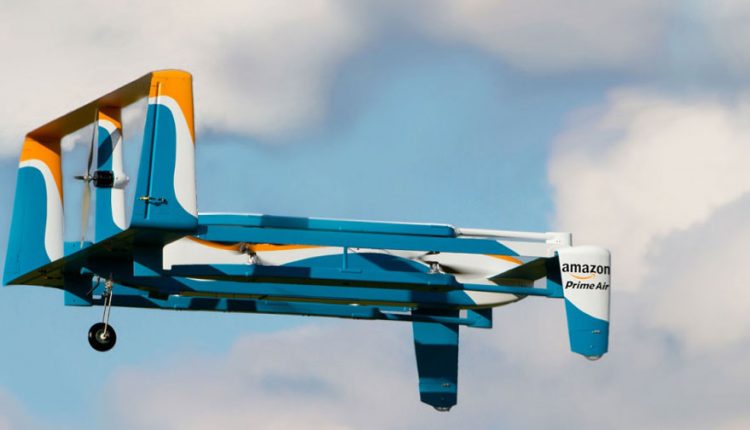 What happens when drone delivery gets off the ground and up in the air?

It is unlikely that it’ll happen very often, but when Amazon and others finally get their fully fledged drone delivery services off the ground, there’ll be occasions when the flying machines suddenly drop out of the sky.

Whether it’s inclement weather, or a software malfunction we have to accept that those multi-copter contraptions will sometimes get into difficulties and fall all the way back to the ground.

It’s one of several challenges that gives the Federal Aviation Administration folks sleepless nights as they consider the safest way to let companies and organizations use the popular technology as part of their operations.

Amazon may have the answer

The online shopping giant is exploring an innovative system that would cause an airborne drone that’s in difficulties to disintegrate in mid-air.

Minimizing the force of the potential impact on any human, animal, or object on the ground.

The idea is outlined in a patent granted this week by the US Patent and Trademark Office.

Titled Direct fragmentation for unmanned airborne vehicles (UAVs), the document describes how a malfunctioning drone could dismantle itself in the sky after assessing the conditions on the ground.

“The fragmentation sequence includes a release timing and a release location to fragment away (e.g., release, drop, jettison, eject, etc. away) one or more UAV components in case the flight operation of the UAV is disrupted,” the company said in the patent.

Conditions that could cause problems for a delivery drone are listed as unexpected heat, cold, wind, rain, hail, high or low (e.g., barometric) pressure regions, or other meteorological conditions.

These could affect the drone’s rotor system, flight control computer, battery, flight sensors, or other components, resulting in a major malfunction that makes it behave more like a brick than an aircraft.

The patent, which Amazon filed in June 2016, said that the release system could include “attachment mechanisms, such as clips, latches, hooks.”

Amazon said the fragmentation sequence would happen automatically, and that depending on which parts of the drone are jettisoned, “the weight, speed, air drag coefficient, and other factors related to the UAV can be altered.”

This suggests that the drone wouldn’t always completely disintegrate.

Rather, it would in some situations only eject the parts causing the problem if it allowed the damaged drone to make a safer landing.

We’re assuming the system would also do its best to ensure that whatever it’s carrying – several textbooks for a delivery, for example – is jettisoned away from anyone its sensors detect on the ground… providing it’s not its sensors that are malfunctioning.

It’s an intriguing idea, though Amazon has been filing a lot of intriguing ideas related to its delivery drone ambitions, some more outlandish than others.

There’s no telling whether this latest idea will become a thing.

But it nevertheless offers some interesting insight into how champions of the technology are hoping to overcome the great challenges that lie ahead.

Are we alone? Mars 2020 Rover Mission searches for life