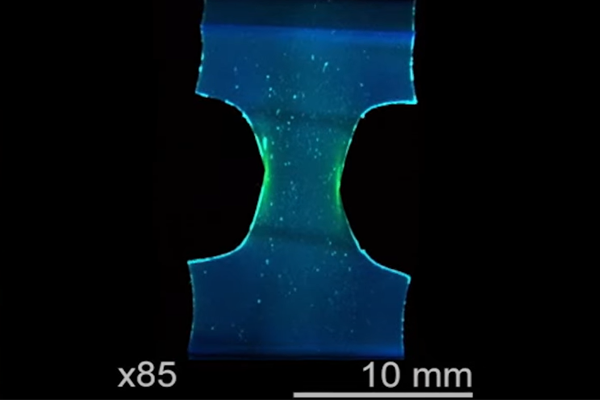 See the Detection of Stressed Polymer Films, Gels Before they Snap

The stretchiness of films and gels enables wearables, soft robotics, and biocompatible tissue. These materials, however, can break them without warning. Researchers from the American Chemical Society have designed a compound with “wings” that make the material change color when stretched or crushed.

Watch a video of the materials.

In previous research, Shohei Saito and colleagues developed V-shaped molecules, known as flapping molecular (FLAP) force probes with two wing-like side structures that flatten under pressure. A color change occurs with the pressure, causing the material to alter from blue to green fluorescence.

The color shift worked when the team incorporated the FLAPS into a polyurethane film. However, the compound spontaneously fluoresced to green without any external force when added to a liquid-soaked polymer gel.

In phase two, they replaced the two anthraceneimide wings with pyreneimide ones and attached them to opposite sides of the same flexible central cyclooctatetraene joint. When added to a polymer film, the color change from blue to green was visible to the naked eye when stretched. The team also added the probe into a polyurethane gel soaked in an organic solvent, creating a yellow cylinder that fluoresced blue, and then compressed the material. As they exerted more pressure, the color became greener. Finally, they placed metal letters F-L-A-P on a rectangular block of the gel and used maps of the green to blue fluorescence ratio to calculate the pressure each letter placed on the gel below, ranging from 0 to 1 MPa.