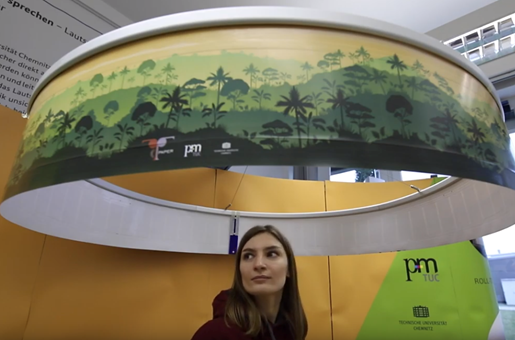 Sheets of Paper-Thin Printed Speakers for a New Surround Sound

How amazing is this? Researchers at Germany’s Chemnitz University of Technology developed a way to print long strips of paper loudspeakers that can roll up into a 360-degree surround sound experience more immersive than found in movie theaters.

The university’s Institute for Print and Media Technology’s research is a follow-up to a 2015 project called the T-Book. Resembling a coffee table book full of beautiful black and white photos, it was an elaborate experiment in flat speaker technology. Each page of the book produces sounds to accompany the photographs.

Printing of these paper-thin speakers involved covering two layers of paper or foil with a conductive organic polymer serving as electrodes. They sandwiched an equally thin piezoelectric layer. This caused the sheet to vibrate like a speaker cone, moving air and producing audible sounds. Printing was slow.

Now, almost six years later, researchers have developed a new printing process, which is detailed in a paper recently published in the Advanced Materials journal. The new operation quickly and reliably produces paper-thin speakers in long sheets for mass-production. With the roll-to-roll printing production, paper-thin speaker material is created in one continuous process that includes lamination of various layers, leaving critical electronics completely sealed and protected from damage.

For the demonstration, a strip almost four meters long was produced containing 56 individual speaker elements. It was then rolled into a cylinder and suspended from the ceiling, weighing a mere 150 grams. It was made from 90% regular paper that even featured a colorful printed design on the outside. When standing inside or beneath the cylinder, a person hears sounds, but someone standing on the outside, nearby, would be hard-pressed to hear anything. As a result, there’s some unique potential for this technology when it comes to serving as an informational display at a museum, or even as advertising in a store that delivers more than just images and text.