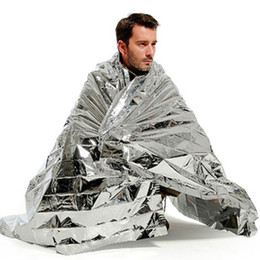 A New Generation of Space Blankets Inspired By Squid Skin

Space blankets have been around for decades. Athletes, in particular, use them to trap in heat.  But until now, they’ve been static. Drawing design inspiration from the skin of stealthy sea creatures, engineers at the University of California, Irvine have developed a next-generation, adaptive space blanket that gives users the ability to control their temperature.

“We’ve made a version with changeable properties so you can regulate how much heat is trapped or released,” said Alon Gorodetsky, UCI associate professor of chemical & biomolecular engineering.

The UCI researchers took design cues from various species of squids, octopuses and cuttlefish that use their adaptive, dynamic skin to thrive in aquatic environments. A cephalopod’s unique ability to camouflage itself by rapidly changing color is due, in part, to skin cells called chromatophores that can instantly change from minute points to flattened disks.

“We use a similar concept in our work, where we have a layer of these tiny metal ‘islands’ that border each other,” said lead author Erica Leung, a UCI graduate student in chemical & biomolecular engineering. “In the relaxed state, the islands are bunched together and the material reflects and traps heat, like a traditional Mylar space blanket. When the material is stretched, the islands spread apart, allowing infrared radiation to go through and heat to escape.”

Gorodetsky said he has many more applications in mind for the novel material: as reflective inserts in buildings to provide an insulation layer that adapts to different environmental conditions; to fabricate tents that would be exceptionally good at keeping occupants comfortable outdoors, and to effectively manage the temperature of valuable electronic components.

Clothing would be a particularly fitting application for the new, bio-inspired material, according to Gorodetsky, who collaborates on research projects with counterparts at athletic apparel manufacturer Under Armour Inc.

“The temperature at which people are comfortable in an office is slightly different for everyone. Where one person might be fine at 70 degrees, the person at the next desk over might prefer 75 degrees,” he said. “Our invention could lead to clothing that adjusts to suit the comfort of each person indoors. This could result in potential savings of 30 to 40 percent on heating and air conditioning energy use.”

And those marathon runners who wrap themselves in space blankets might be able to type in a number on a garment-integrated user interface to achieve the desired level of thermal comfort, optimizing performance during races and recovery afterward.

Other benefits Leung mentioned include the material’s light weight, ease and low cost of manufacturing, and durability. She noted that it can be stretched and returned to its original state thousands of times.

Story via University of California- Irvine

Software Solution to Manage a Range of PV Projects

Women in Electronics Announces the Even Better Together Summit: Progressing Cultural…

Revenue Per Wafer Climbs As Demand Surges for 5nm/7nm IC…

Revenue Per Wafer Climbs As Demand Surges for 5nm/7nm IC…