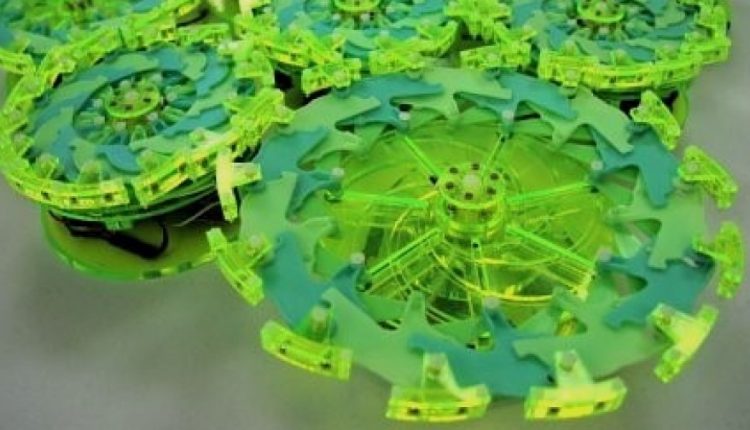 The Dawn of Robotic Gray Goo

Today’s robots are usually self-contained entities made of interdependent subcomponents, each with a specific function. If one part fails, the robot stops working. Even in robotic swarms, each robot is an independently functioning machine.

However, a team of researchers at Columbia Engineering and MIT Computer Science & Artificial Intelligence Lab (CSAIL) have created a robot composed of many loosely coupled components, or “particles.” Each particle can perform only uniform volumetric oscillations (slightly expanding and contracting) but cannot move independently.

Together, the particles act as the robotic “Gray Goo” popularized in science fiction, albeit more innocuous than the nanomachines that consume Earth’s organic matter in books and movies. The Columbia Engineering/MIT Team foresee robust, scalable robots that can function even when individual components fail.

The team, led by Hod Lipson, professor of mechanical engineering at Columbia Engineering, and CSAIL Director Daniela Rus, discovered that when they grouped thousands of the particles together in a “sticky” cluster and made them oscillate in reaction to a light source, the entire particle robot slowly began to move forward, towards the light.

“Our robot has no single point of failure and no centralized control,” says Lipson. “It’s still fairly primitive, but now we know that this fundamental robot paradigm is actually possible.”

Modeling the behavior of the Goo in simulations, researchers explored obstacle avoidance and object transport at greater scales, with hundreds and thousands of particles. They also demonstrated the resilience of the particle robot paradigm both to noisy components and to individual failure, finding that the particle robots maintained approximately half of their fully functioning speed even when 20% of the particles were dead.

“We think it will be possible one day to make these kinds of robots from millions of tiny particles, like microbeads that respond to sound or light or chemical gradient,” says Lipson. “Such robots could be used to do things like clean up areas or explore unknown terrains/structures.”

How to Get Free Beer, Pizza, and Hardware and IoT Insights From Experts