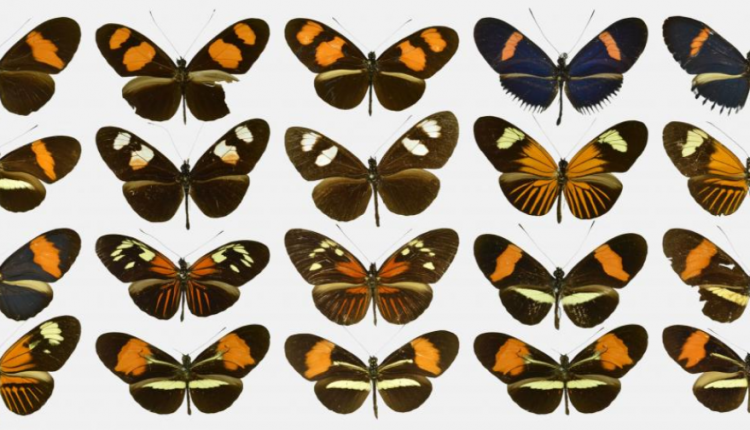 Threats to biodiversity from competing land use, pollution, population growth, and human activities make the study of evolutionary biology more crucial than ever if we’re to stem species loss, currently estimated at 1,000 to 10,000 times higher than the natural extinction rate.

Researchers from the University of Cambridge, the University of Essex, the Tokyo Institute of Technology and the Natural History Museum London are now using AI and a machine-learning algorithm to test whether butterfly species can co-evolve similar wing patterns for mutual benefit. This phenomenon, known as Müllerian mimicry, is considered evolutionary biology’s oldest mathematical model and was put forward less than two decades after Darwin’s theory of evolution by natural selection.

The algorithm was trained to quantify variation between different subspecies of Heliconius butterflies, from subtle differences in the size, shape, number, position, and color of wing pattern features, to broad differences in major pattern groups.

This is the first fully automated, objective method to successfully measure overall visual similarity, which by extension can be used to test how species use wing pattern evolution as a means of protection. The results are reported in the journal Science Advances.

Species borrow features from each other and generate new patterns

The researchers found that different butterfly species act both as model and as mimic, “borrowing” features from each other and even generating new patterns.

“We can now apply AI in new fields to make discoveries which simply weren’t possible before,” said lead author Dr. Jennifer Hoyal Cuthill from Cambridge’s Department of Earth Sciences. “We wanted to test Müller’s theory in the real world: did these species converge on each other’s wing patterns and if so how much? We haven’t been able to test mimicry across this evolutionary system before because of the difficulty in quantifying how similar two butterflies are.”

Müllerian mimicry theory is named after German naturalist Fritz Müller, who first proposed the concept in 1878, less than two decades after Charles Darwin published On the Origin of Species in 1859. Müller’s theory proposed that species mimic each other for mutual benefit. This is also an important case study for the phenomenon of evolutionary convergence, in which the same features evolve again and again in different species.

For example, Müller’s theory predicts that two equally bad-tasting or toxic butterfly populations in the same location will come to resemble each other because both will benefit by “sharing” the loss of some individuals to predators learning how bad they taste. This provides protection through cooperation and mutualism. It contrasts with Batesian mimicry, which proposes that harmless species mimic harmful ones to protect themselves.

Heliconius butterflies are well-known mimics and are considered a classic example of Müllerian mimicry. They are widespread across tropical and sub-tropical areas in the Americas. There are more than 30 different recognizable pattern types within the two species that the study focused on, and each pattern type contains a pair of mimic subspecies.

However, since previous studies of wing patterns had to be done manually, it hadn’t been possible to do a large-scale or in-depth analysis of how these butterflies are mimicking each other.

“Machine learning is allowing us to enter a new phenomic age, in which we are able to analyze biological phenotypes—what species actually look like—at a scale comparable to genomic data,” said Hoyal Cuthill.

The researchers used more than 2,400 photographs of Heliconius butterflies from the collections of the Natural History Museum, representing 38 subspecies, to train their algorithm, called “ButterflyNet.”

ButterflyNet was trained to classify the photographs, first by subspecies, and then to quantify the similarity between the various wing patterns and colors. It plotted the different images in a multidimensional space, with more similar butterflies closer together and less similar butterflies further apart.

“We found that these butterfly species borrow from each other, which validates Müller’s hypothesis of mutual co-evolution,” said Hoyal Cuthill. “In fact, the convergence is so strong that mimics from different species are more similar than members of the same species.”

“Intuitively, you would expect that there would be fewer wing patterns where species are mimicking each other, but we see exactly the opposite, which has been an evolutionary mystery,” said Hoyal Cuthill. “Our analysis has shown that mutual co-evolution can actually increase the diversity of patterns that we see, explaining how evolutionary convergence can create new pattern feature combinations and add to biological diversity.

“By harnessing AI, we discovered a new mechanism by which mimicry can produce evolutionary novelty. Counterintuitively, mimicry itself can generate new patterns through the exchange of features between species which mimic each other. Thanks to AI, we are now able to quantify the remarkable diversity of life to make new scientific discoveries like this: it might open up whole new avenues of research in the natural world.”