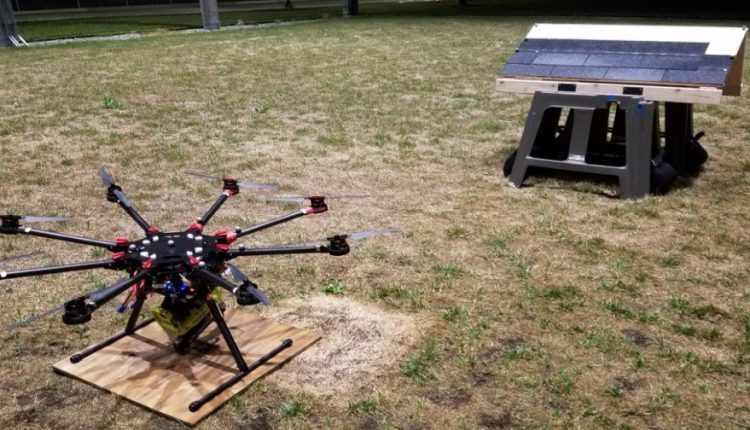 Up on the Rooftop… Drones are at Work

What’s that you hear above you? It’s not Santa and his reindeer just yet. But it could be a drone practicing its roofing skills.

Drones are not just used for military operations or as children’s toys. These small aircraft play ever-increasing roles in a number of industries, from farming to real estate.

Drones, increasingly, will be able to take on roles that are difficult, expensive, or dangerous for people to do. One example? Putting roofing shingles on a roof of virtually any grade.

There’s a reason roofing was named the sixth most dangerous job in the U.S. by the Department of Labor Bureau of Statistics. With a fatality rate of 34.7 per 100,000 roofers and a risk of injury from a fall due to wet surfaces or damaged roofs, using drones for even a portion of the roofing task could help minimize risk to roofers.

And scientists at the University of Michigan (UM) may have discovered a way to use drones to assist in the most dangerous of roofing tasks. A DJI S1000 Octocopter equipped with an electric nail gun was able to affix asphalt shingles to a mock rooftop.

The team used a system of cameras and markers, enabling the aircraft to gauge its own position in its environment relative to where the nails should go. The drone can guide itself toward the spot requiring a nail. Then, a virtual switch programmed into the drone enables it to pull the trigger on the nail gun.

The researchers performed several demonstrations to reveal the drones’ capabilities. The drone nailed shingles to a wooden panel at different angles, modeled after roofs with different slopes.

The exhibit, however, was merely a proof-of-concept. The drone is, at the moment, inferior to human roofers. It can only operate for 10 minutes due to a limited power supply. However, a power cable would permit the drone to fly indefinitely, while an air-line could enable the use of a pneumatic nail gun for additional power.

The Diverse Haptics Landscape of the Future