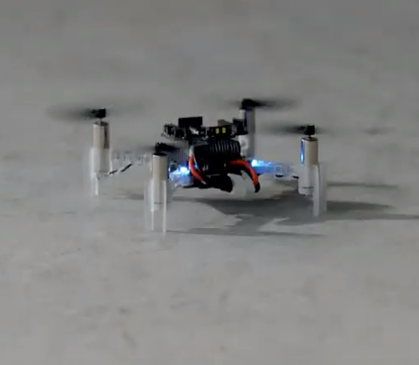 The researchers from TU Delft (the Netherlands), University of Barcelona, and Harvard University developed the first swarm of tiny drones that can autonomously detect and localize gas sources in cluttered indoor environments. It took adding Artificial Intelligence and making it fit into the drone’s tight computational and memory constraints. They solved this challenge by means of bio-inspired navigation and search strategies. The scientific article is public on the ArXiv article server and will be presented at the IROS robotics. The work forms an important step in the intelligence of small robots.

Artificial gas sensors are currently less capable than animal noses in detecting small amounts of gas and staying sensitive to quick changes in gas concentration. To date, research focused on single robots that search for a gas source in rather small, obstacle-free environments in which the source is easier to find.

The tiny drones implement a new “bug” algorithm for navigation, termed “Sniffy Bug.” Until the drones sense gas, they spread out as much as possible, avoiding obstacles and each other. If one senses gas at its location, it communicates this to the others, and they collaborate with each other to find the gas source as soon as possible. The current work does not yet tackle moving in three dimensions to locate gas sources at a height. Furthermore, the robustness of navigation should also be improved before deploying the drones in a real emergency scenario. The developed algorithms are also useful for scientific missions such as detecting methane on Mars or economical use such as the early detection of diseases or pests in greenhouses.