As expected, most IC suppliers experienced weaker demand and generally poor sales results in the first half of this year due to the Covid-19 pandemic and strained U.S./China trade relations. However, as reported in IC Insights’ August Update to the 2020 McClean Report, some key IC suppliers believe that the second half of this year will yield better results.

Second-half guidance and outlooks for the full year from three leading IC companies help shed some light on what companies are expecting for the second half of this year.

TSMC is by far the largest semiconductor foundry in the world and is a critical supplier of 7/5nm application processor devices. Figure 1 shows an updated outlook at TSMC’s 2020 sales forecast given its actual 1H20 results. As shown, while the company expects its full-year sales ‘to grow above 20%’ this year, IC Insights believes its 2H20/1H20 sales will increase by eight percent, yielding a full-year jump of 24% for TSMC. 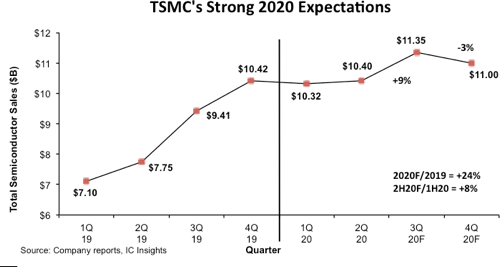 There is no doubt that Apple’s need for leading-edge application processors will be a driving force in this growth. In the second half of 2020, TSMC reported that it shipped its one-billionth 7nm IC and expects to be in high volume production of devices manufactured using its 5nm process technology. In total, the company expects about $3.5bn in revenue come from its 5nm shipments in 2H20, representing eight percent of its total sales in 2020.

Intel, the largest semiconductor supplier in the world, put its full-year 2020 sales growth guidance at four percent during a discussion of its actual 2Q20 sales results. However, Intel’s 2H20/1H20 expectations are for a ten percent drop in revenue. The company attributed its strong 1H20 sales and soft 2H20 expectations to some customers building inventory, a ‘safety stock’ of parts given the uncertainties surrounding the trade issues. This inventory is expected to burn off in the second half of this year 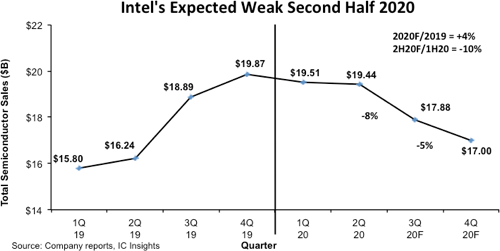 ST has big hopes for 2H20. After a precipitous drop of 19% in 1H20/2H19, the company expects a strong 19% jump in its 2H20/1H20 sales. The company’s jump in sales in the second half of this year is forecast to be driven by a rebound in the automotive sector from an exceptionally weak 1H20 and a increase in demand from the industrial segment of the market as the global economy displays some stability from a disastrous first half of this year.

However, even after a strong 2H20, ST’s total semiconductor sales are expected to be down one percent this year. 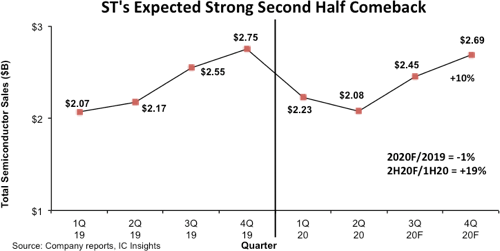 Network Slicing Market is Projected to Reach $600m by 2026

Which Materials Will Be Required for the Growing EV Market?