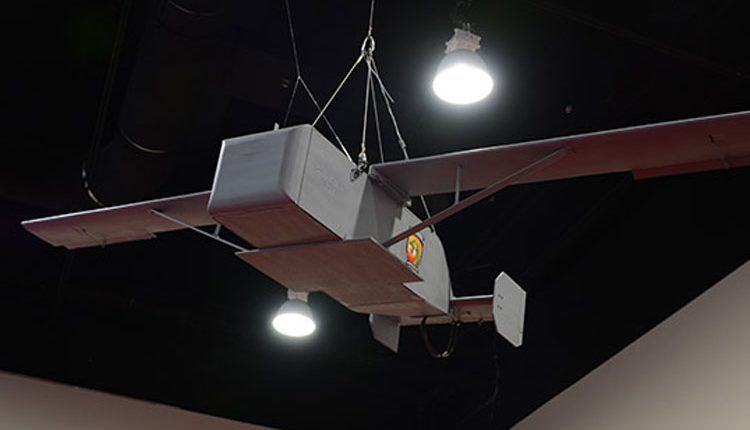 In terms of logistics, getting supplies delivered to troops in remote areas is a big part of what the U.S. military does. In many cases, it’s too dangerous to send an airplane or helicopter, so the military is always looking for new ways of carrying out such resupply missions.

Earlier this month at the Sea Air Space 2017 trade show in National Harbor, Md., there was a new concept for remote resupply that the U.S. Marine Corps Warfighting Laboratory has been testing. The TACAD (TACtical Air Delivery) glider is a prototype for an unpowered drone that can fly huge distances to deliver up to 700lbs (317kg) of whatever you need with high accuracy, and then be abandoned where it lands without a second thought.

The picture above is a small scale model of the TACAD drone glider that the Marines are planning on building. The final version will be twice the size and able to handle 20ft3 (0.5m3) of cargo. The body of the drone will be made of materials such as plywood and metal fasteners found at hardware stores. The electronics will include a hobby-grade GPS and autopilot system with a few servo motors to do the steering.

A crash landing that leads to total destruction of the TACAD airframe is perfectly acceptable. The idea is that the payload (which won’t be anything fragile) gets to the ground safely, and after that the glider is simply left there to rot. Making the drone disposable keeps costs way, way down, and the hope is that the total cost for a production TACAD glider will end up somewhere between $1,500 and $3,000.

The TACAD will be able to “deliver food, water, batteries, fuel and other supplies at the same price and precision as existing aerial delivery systems while providing a much greater standoff capability and enhanced weather limitations,” says Lt. Morgan Grossman from the Marine Corps Warfighting Laboratory.

Right now, the most common way that the military delivers supplies to remote areas where it’s too dangerous to land an airplane or helicopter is with a system called JPADS, or Joint Precision Airdrop System. Each JPADS consists of an autonomous, steerable airfoil, with its own GPS system and battery packs, that can carry up to 10,000lbs (4500kg) of cargo. Just give it some coordinates, push it out the back of a plane, and if everything goes well it’ll land within about 50m of where you told it to.

The biggest advantage of TACAD over JPADS is the range. JPADS, being fancy parachutes, mostly just go down. You can drop them out of an airplane from very high up, but that airplane still needs to be more or less over the area that you want the JPADS to land in. TACAD, on the other hand, can easily glide for tens of miles, meaning that a manned aircraft can drop them from safe airspace and still deliver supplies into an unsafe area. With a target glide ratio of 15:1, a 30,000ft drop height could yield an effective range of between 30 and 70m (48 to 112km).

TACAD has one more big advantage over JPADS—it’s disposable. One JPADS kit costs several tens of thousands of dollars, and it’s designed to pay for itself by being dropped, recovered, and reused a few dozen times. It’s a good idea in concept, but the problem is that you’re now tasking whoever you’re delivering supplies to with also packing up the 30lb JPADS and keeping it safe until it can be somehow picked up and refurbished. Especially for a small fighting unit, this can be a major hassle, and if they need supplies frequently and are moving a lot, now they’re hauling all of these valuable but useless JPADS around with them. With TACAD, you just get the supplies out and leave it.

But as Lt. Grossman explains, TACAD could also be useful in a number of non-military missions:

While the intended use will have military applications, low cost gliders like this could be used anywhere that quick delivery of supplies is needed and more traditional means of delivery are not available. Applications such as disaster relief, remote mountain search and rescue, forest fire fighting, and remote site support could all utilize resupply by means such as this.

This project has a lot in common with the APSARA cardboard drones from Otherlab that we covered a few months ago, although both were developed separately. TACAD is obviously much bigger, more expensive, and designed to be discarded as opposed to vanishing. Both projects offer a clever solution to a challenging problem, and we hope this means that we’ll be seeing disposable drones pop-up in other useful areas as well.

Full scale prototypes of the TACAD drone gliders should begin flight testing in 2018.

Getting fresh water, anywhere on Earth