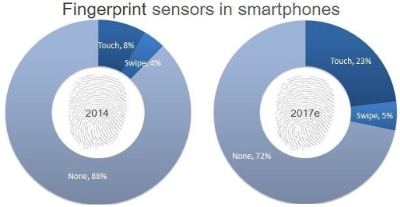 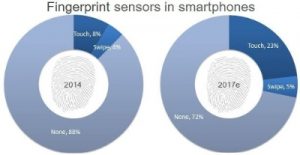 2014 was a watershed year for fingerprint sensors in smartphones. Apple’s iPhone 6 coupled the company’s new mobile payment service with a touch-type fingerprint sensor creating a wow effect among consumers. The use of biometrics for the authorization of financial transactions has a futuristic appeal and an allure of improved security and convenience.

Realizing they had to match Apple’s sudden mobile payment lead, Apple’s competitors have reacted quickly. Samsung, for example, recently unveiled its own payment service coupled with a touch fingerprint sensor for authentication. It was an expected move, and the company’s use of a magnetic-stripe compatible technology could give Samsung the volume lead. Now other smart device vendors are expected to introduce a similar set of features in their next iteration of flagship phones.

With more than 10 billion smartphones and tablets expected to be shipped during the coming five years, related component volumes are expected to soar. Market research firm Research Capsule, expects fingerprint sensors will be joining the cast of now ubiquitous smartphone sensors though market penetration will vary by device price tiers.

Research Capsule believes that mobile payment will continue to be the primary driver for fingerprint sensors with the number of use cases expanding during the coming years. The volumes will be significant and though there are currently only a limited number of component vendors supplying the sensors, the flurry of activity is attracting both startups and established telecomm players to cater to this hot market.

Qualcomm’s recent introduction of its Snapdragon Sense ID ultrasonic-based fingerprint sensor could be a substantial disruptor to current component suppliers. The company’s wide industry footprint and relationship with most major smartphone vendors could propel it to a leadership position just as the market is reaching mainstream. Qualcomm’s entry into the fingerprint market was expected after it acquired Ultra-Scan several years back, but the demonstrations recently given at Mobile World Congress were impressive and shipments could happen sooner than expected.