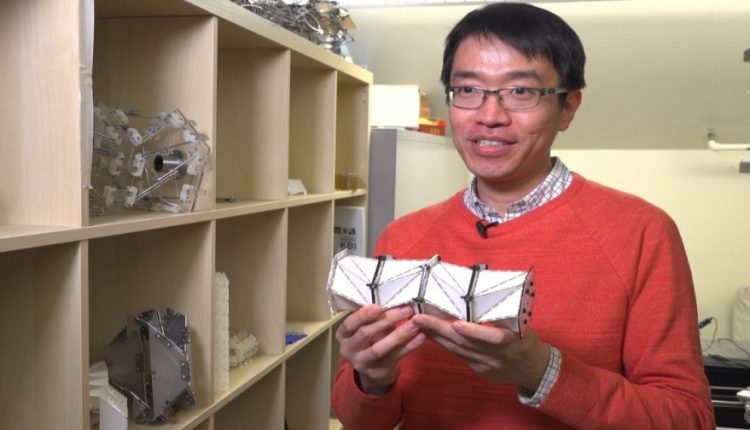 Inspired by Origami, Designed for Aerospace

Reusable launch vehicles are the key to success and cost-savings for SpaceX, Blue Origin, and other aerospace companies seeking to win the next phase of this era’s “space race.”

In order to use a rocket multiple times, the rocket must land without damage. But landing places tremendous stress on the rocket’s legs; they must handle the force of impact with the landing pad. If you can build legs out of a material that absorbs some of that force, you’ll soften the blow and potentially, prolong the life of the reusable rocket.

“If you were wearing a football helmet made of this material and something hit the helmet, you’d never feel that hit on your head. By the time the energy reaches you, it’s no longer pushing. It’s pulling,” said corresponding author Jinkyu Yang, a UW associate professor of aeronautics and astronautics.

Metamaterials are like interlocking blocks, called unit cells. The design of the unit cells affects the characteristics of the material. For their prototype design, the researchers used a laser cutter to cut dotted lines into paper to designate where to fold. The team folded the paper along the lines to form a cylindrical structure and then glued acrylic caps on either end to connect the cells into a long chain.

The researchers lined up 20 cells and connected one end to a device that pushed and set off a reaction throughout the chain. Using six GoPro cameras, the team tracked the initial compression wave and the following tension wave as the unit cells returned to normal.

Researchers could use a similar design constructed from composite materials – and optimized for specific applications – to reduce impact forces in spacecraft, cars, and more.