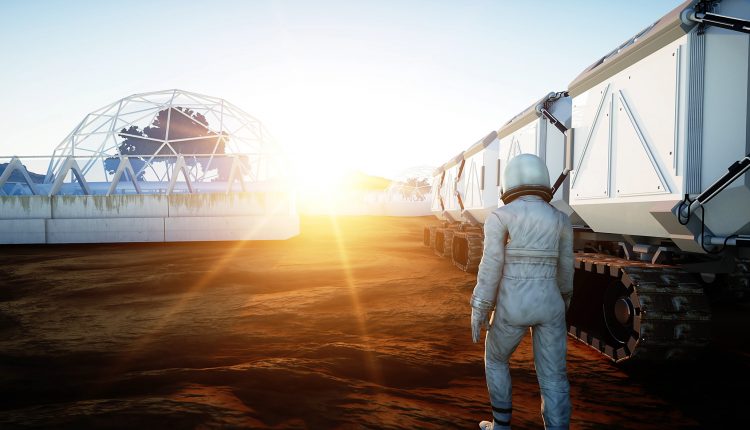 Materials That Could Bring Life To Mars

Elon Musk, CEO of SpaceX, believes that the first sustainable city on Mars could be a reality in 20 years, with 1000 starships to handle the logistics of the seven-month journey to the planet. On the other hand, in a recent Pew Research Centre survey carried out in June 2018, only 18 per cent of US adults believed that sending humans to Mars should be a high priority, ahead only of returning to the Moon. Given our modern scientific understanding of the red planet, just how feasible is it that humans will live and thrive there during our lifetime?

To begin with, it’s unlikely that Elon Musk’s envisioned fleet of spaceships will be overloaded with Earth materials, as it won’t be feasible to transport through space all the materials that we’ll need to live, subsist and remain safe on Mars over the long-term. Incidentally, that also includes transporting wildlife.

Instead, the design and civil engineers of the not-too-distant future will turn to Mars’ indigenous resources to satisfy our needs. Fortunately, the red planet’s natural resources, and their possibility to foster human life, are central to why notions of populating Mars have moved from fantasy to scientific plausibility.

For one thing, Mars has carbon that can be extracted from the atmosphere and used to make plastics, rocket fuel or heating fuel. Nitrogen, hydrogen and oxygen are all biologically accessible in forms like carbon dioxide gas, nitrogen gas, and water ice and permafrost. In-situ resource utilisation (ISRU) equipment could be key in exploiting these resources, like subsurface water ice deposits.

In terms of building materials, Mars’ settlers won’t be short of ceramics thanks to the ubiquity of clay-like materials in Martian soil. There are also plentiful mineral resources including iron, titanium, nickel, aluminium, sulphur, chlorine and calcium.

Silicon dioxide is the most common material on Mars, according to measurements taken by the Viking space probes, and is also a basic ingredient of glass. It is likely that glass products, including fiberglass, and structures could be constructed on Mars in much the same way as they are on Earth.

Regolith is another readily available Martian construction material. The pulverised, dusty rock — that’s mostly silicon dioxide and ferric oxide, with a fair amount of aluminium oxide, calcium oxide and sulphur oxide — has been deposited over Mars by asteroid collisions over billions of years. Researchers think that regolith could be a viable alternative for concrete.

But how strong would Martian concrete actually be? Mars has a lot of sulphur in its soil, and molten sulphur is used to bind some concrete on Earth. Tests at Northwestern University, Illinois, US, have mixed melted sulphur with JSC Mars-1a in a ratio of 1:3, the same recipe used for sulphur concrete on Earth. Tests of the simulated Martian concrete’s strength under compression, bending and splitting found it to be much weaker compared with concrete made using Earth sand. This was attributed to the Martian sand’s porosity. The Earth composition’s compression strength was about 30 megapascals, similar to that of cement-based concrete.

Further experiments with a 1:1 sulphur-to-sand mix compressed the mixture, broke down grains and drove out air bubbles. This resulted in a strength of 60 MPa, which is twice as strong as concrete. Sulphur-based concrete also has quick-setting advantages, offering more immediate strength that could be advantageous for 3D printing applications.

Aside from the cement used, modular underground living will likely be the surest way to protect Mars’ settlers from cosmic radiation and intense cold. Such digging could also expose water, ice and other resources under the surface for ISRU.

It’s impossible to deny the bare necessities, and NASA’s plans to send a manned three-year mission to Mars in the 2030s can only happen if the astronauts have a continual food supply.

A 2016 scientific and technical information paper by NASA, “Frontier In-Situ Resource Utilization for Enabling Sustained Human Presence on Mars”, suggests that protected atmospheric environments that harness either sunlight or artificial light sources could be the answer to our food storage needs. Robots will also likely be employed — which is no stretch given that robot agriculture is firmly established here on Earth. One thing is for sure: astronauts will have to grow their own food. But how?

Here, typical science fiction concepts would include modifying or terraforming the planet’s atmosphere. In reality, humanity won’t have to go this far thanks to aerogel, the synthetic porous ultralight material. Specifically, silica aerogel — the most common type of aerogel, a good insulator and a poor conductor of heat.

The idea is that, if silica aerogel shields were placed over sufficiently icy regions of Mars’ surface, then photosynthetic life could survive there with minimal subsequent interference. Mars’ colonists would then have the capability to grow their own food with mushrooms, cyanobacteria and even insects.

Alongside the efforts of NASA and SpaceX, tests of Earth-based simulants of Mars’ elements will determine whether humanity has a viable future on Mars. JSC Mars-1a, for instance, is made from basalt sourced from a volcano in Hawaii. There are a variety of Mars simulants, they all based on basalt and are selected for tests based on their mineralogical properties, particle sizes and distribution, among other qualities. They include BP-1 that is made from a different variant of crushed basalt source from Flagstaff in Arizona, US.

For now, continued testing here on Earth will assess the viability of these materials and technologies and lead to better replicas. Ongoing tests include those by the University of California in San Diego, US. Its research examines the relatively high concentrations of perchlorate compounds, containing chlorine, in Martian soil that render it toxic.

The studies aim to assess whether the perchlorates change the behaviour of the tested materials, focussing on impurities. Perchlorates may offer a potential energy source for microorganisms, for example, and therefore potential to grow life.

Other studies, such as at  the UK Centre for Astrobiology at the University of Edinburgh in Scotland, are less positive about perchlorates. One test exposed cells of the bacterium Bacillus subtilis, a common spacecraft contaminant, to perchlorates and UV radiation at levels similar to those on or near Mars’ surface.

The cells lost viability within minutes, and even more quickly in Mars-like conditions; and their lifespan decreased to 60 seconds when iron oxides and hydrogen peroxide, two other common components of Martian regolith, were added to the mix.

The data concluded that the probable survival of biological contaminants on Mars’ surface is low. Through the combined effects of at least three components of the Martian surface activated by surface photochemistry, the landscape of the red planet is more uninhabitable than previously thought.

It’s clear that Mars’ resources offer much potential in supporting human colonisation. But it will fall to design, civil and space engineers to ensure that the fruits of these opportunities are safe, realistic, ethical and last into the long-term.

Philip K. Dick’s colonised Martian landscape of waterways, allotments and robots seems less and less like science fiction. However, rigorous materials testing of JSC Mars-1a and its variants here on Earth will be the crucial factor in determining whether humanity, and its design and civil engineers, can lay the foundations for human life on Mars.