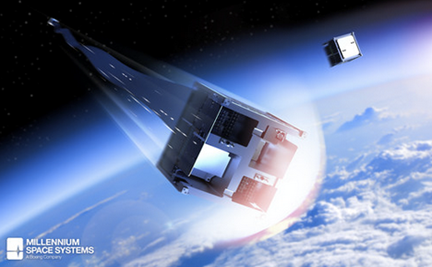 Dragracer is the first direct comparison of a drag tape that quickly and safely de-orbits satellites. Given two identical satellites, the satellite with a 70m Terminator Tape developed by Tethers Unlimited, burned upon re-entry to Earth’s atmosphere after eight months. The satellite without tape will naturally deorbit unaided on its journey back to Earth after at least seven years. The drag tape significantly reduces space debris, and the chore of tracking it over a long period of time.

The Terminator Tape interacts with the Earth’s atmosphere to create drag, drawing satellites back to Earth faster. The tape is deployed with a simple mechanism when a satellite is ready to de-orbit. Lightweight, the tape has no effect on the satellite’s primary mission.

Dragracer is the first complete demonstration of safe and rapid satellite deorbit. Terminator Tape is affordable, lightweight, patented, and flight-proven for responsible end-of-mission disposal of satellites and to help ensure the long-term sustainability of space operations.

US Batteries with Atomic Layer Deposition Launched Aboard SpaceX