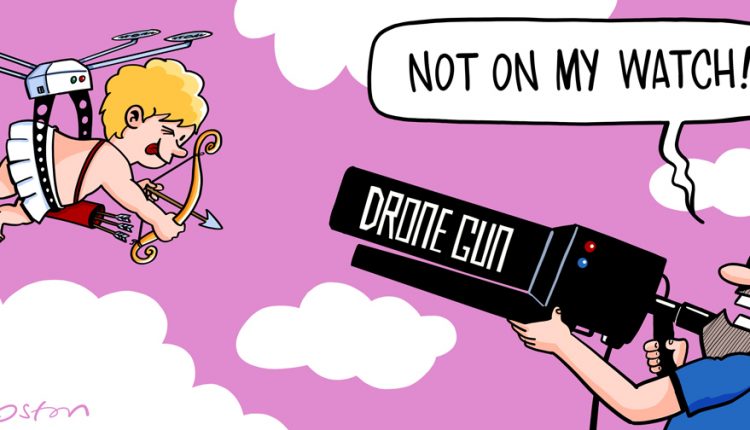 Roses are red, my drone gun is blue

Whether you go gooey-eyed at the prospect of receiving a Valentine’s Day card from a secret admirer or would rather scratch your eyes out than see another bouquet of red roses – one thing most tech fans can agree on, is their love of drones.

While drones unleash one’s inner child, they are becoming so sophisticated that they are educating the adult engineer; from the embedded technology to the lightweight materials and process of manufacturing – such as the FitoStinger lightweight drone made out of carbon.

But that wasn’t enough, even when the drone-boomer generation was starting to slow down in 2017, and the design focus was taken off of drones as toys, and towards drones as cameras – drones started their very own scare: invasion of privacy.

Suddenly drones were Public Enemy No.1, and drones were being used to spy on sunbathing neighbors or deliver contraband parcels to federal inmates.

Then everything came full circle with the drone gun. The engineer giveth and the engineer taketh away. A new sport was born, and not just an excuse, a right even, to spoil someone’s fun (albeit no longer legal in no-drone zones), and capture their property.

Drones are now even being used at high profile events such as the Winter Olympics to help patrol the event, so let’s hope their security doesn’t mistake them for enemy UAVs and take them out with their drone guns.