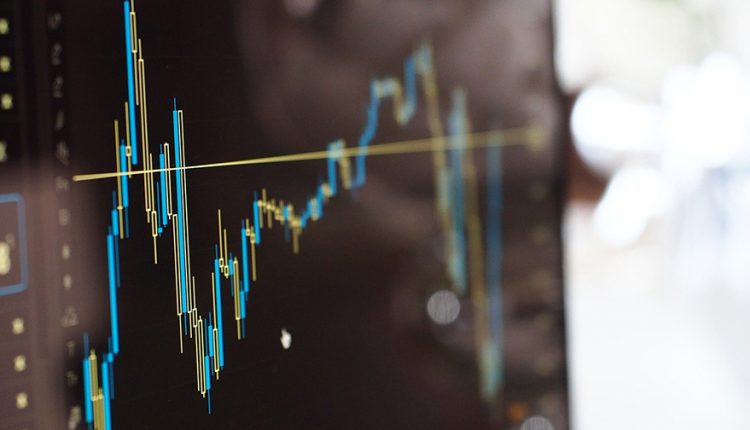 Propelled by 51% share of IDM sales and 65% share of fabless sales, US companies captured 55% of the total worldwide IC market in 2019.

Regional marketshares of IDMs (companies operating wafer fabs), fabless companies, and total IC sales were led by US headquartered companies in 2019, according to data presented in the recently released March Update to The McClean Report 2020.

Figure 1 shows US companies held 55% of the total worldwide IC market in 2019 followed by the South Korean companies with a 21% share, down six percentage points from 2018.  Taiwanese companies, on the strength of their fabless company IC sales, held 6% of total IC sales, one point less than the European companies. 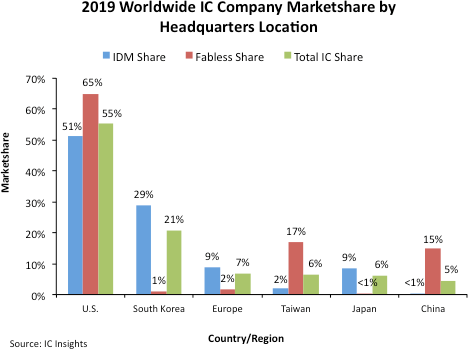 South Korean and Japanese companies have an extremely weak presence in the fabless IC segment and the Taiwanese and Chinese companies have a noticeably low share of the IDM portion of the IC market. Overall, US-headquartered companies showed the most balance with regard to IDM, fabless, and total IC industry marketshare.

Driven by a collapse in DRAM and NAND flash memory IC sales in 2019, the South Korean-headquartered companies, primarily Samsung and SK Hynix, registered a 32% sales drop, the worst of any major country/region (Figure 2).

Interestingly, the South Korean companies logged the largest increase in sales in 2018 at 26%. However, with the memory market expected to show a rebound in 2020, it would not be surprising to see the South Korean companies go from ‘first to worst’ regarding IC sales growth by company headquarters location this year as compared to last year.  The Chinese, European, Taiwanese, and US companies declined at a lesser rate than the total IC industry (-15%) last year. 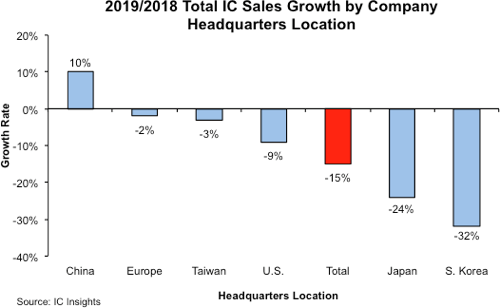