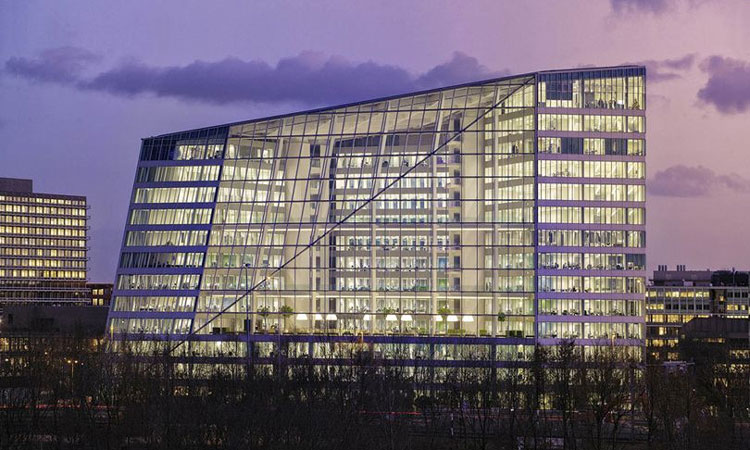 Ron Bakker has designed the world’s most sustainable building – and it just so happens to be the world’s smartest, too. His London-based architecture company, PLP, finished the construction of Deloitte’s new Amsterdam HQ in 2015, with the aim of focussing on the needs of those inside it. “It was about making people happier,” he said.

Bakker has been thinking about sustainability for 25 years. “From a long time ago, it became a part of how we look at buildings.” But, it wasn’t until 2007, when PLP was approached by Dutch development firm OVD that Deloitte’s Amsterdam HQ, known as The Edge, was able to take shape. OVD wanted Bakker’s firm, which had already built Deloitte’s offices in Rotterdam and The Hague, to join the three projects together. PLP entered into a competition to win the bid, consulting with Deloitte closely. “Actually we talked about people,” said Bakker, who was amongst the speakers at WIRED Energy. Deloitte wanted to make employees from different departments to get to know each other. The winning design was a huge atrium that would give people somewhere to gather and socialize.

Then, in 2008, the global recession hit. The market for development disappeared and The Edge was put on hold until things were more stable. “We kind of looked at ways of getting this ready for when the recession had finished,” said Bakker. The team at PLP realised that the more sustainable a project is, the more valuable it would be to investors. And to achieve that goal, Bakker realized they had to build the smartest office block in the world.

The huge atrium acts as the lung of the building, providing airflow into office spaces. The building is north-facing, with two distinct sides: one with sun and one without. The atrium is designed to allow for an energy-efficient floor plan, which conceals noise pollution from the motorway to the north, but allows light in from the south.

“We use the Earth as a battery which is 30 meters deep underground,” Bakker said. This allows the building to store heat in the summer to be used in the winter. “We don’t use any energy for heating or cooling the building, ever.” But that alone wasn’t groundbreaking. “We have been doing that for 20 years,” Bakker said. “What is interesting is that have considered people.”

At the Deloitte offices in the Netherlands, PLP realized only 25% of people were actually at their desks simultaneously. So, despite the firm having 3,000 employees, PLP only put in space for 1,000 desks. In turn, the firm saved a third on energy costs and a third on construction costs. But this meant workspaces needed managing. As a solution, the team built an app to organize the spaces digitally. This was the beginning of incorporating more and more of the app into the inner workings of buildings.

The team designed 30,000 sensors to be placed every two feet throughout the office, measuring every aspect of lighting, CO2 levels and humidity. The building’s brain can make decision by itself, deciding where it’s best for people to work and free-up and open the doors of meeting rooms when required. “This is why we call it the smart building,” Bakker said.

And, slowly but surely, other cities are catching on. “Sure, aspects of this are cropping up [in London],” said Bakker. “Now there’s a realisation that air quality and the health and wellness aspect of a building is important.” Whilst Bakker is confident that we will see more smart and sustainable buildings in our big cities, the Edge is an exception. “Things came together in one building and our client supported us in one big great idea,” said Bakker. “And I think that is pretty unusual.”

The First Hybrid Electric Plane Will Be Delivered In 2022

VibWrite: A Biometric Access System That Reads Your Fingerprints