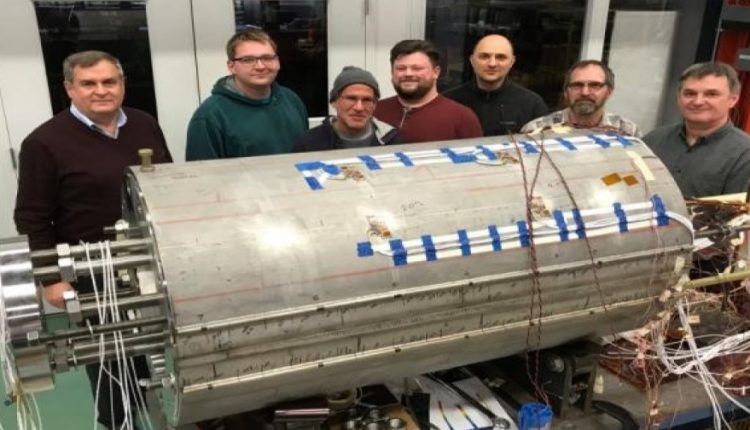 A World Record in Accelerator Magnets

The particle physics community stands on the brink of the technology needed for a successor to the Large Hadron Collider. The 17-mile circumference collider has been operating at CERN laboratory since 2009. It uses steering magnets with a field strength of just under14 teslas.

Lawrence Berkeley National Laboratory has held the record for creating an accelerator magnet with a field strength of 13.8 teslas, a record it’s held for 11 years. Researchers have been challenged to break that 14-tesla wall for years.

Scientists at the Department of Energy’s Fermilab recently broke the world record, achieving a magnetic field strength of 14.1 teslas with the magnet cooled to 4.5 kelvins or minus 450 degrees That’s more than a thousand times stronger magnet than an average refrigerator magnet.

“We got to 14.1 teslas with our 15-tesla demonstrator magnet in its first test. Now we’re working to draw one more tesla from it,” said Fermilab scientist Alexander Zlobin, who leads the project at Fermilab.

To build the next generation of powerful proton accelerators, scientists need the strongest magnets possible to steer particles close to the speed of light around a ring. For a given ring size, the higher the beam’s energy, the stronger the accelerator’s magnets needed to keep the beam on course.

At the heart of the new magnet’s design is an advanced superconducting material called niobium-tin.

To address this challenge, the Fermilab team developed a magnet design that would shore up the coil against every stress and strain it could encounter during operation. Several dozen round wires were twisted into cables in a certain way, enabling it to meet the requisite electrical and mechanical specifications. These cables were wound into coils and heat-treated at high temperatures for approximately two weeks, with a peak temperature of about 1,200 degrees Fahrenheit, to convert the niobium-tin wires into superconductors at operating temperatures. The team encased several coils in a strong innovative structure composed of an iron yoke with aluminum clamps and a stainless-steel skin to stabilize the coils against the huge electromagnetic forces that can deform the brittle coils, thus degrading the niobium-tin wires.

Over the next few months, the group plans to reinforce the coil’s mechanical support and then retest the magnet this fall. They expect to achieve the 15-tesla design goal.