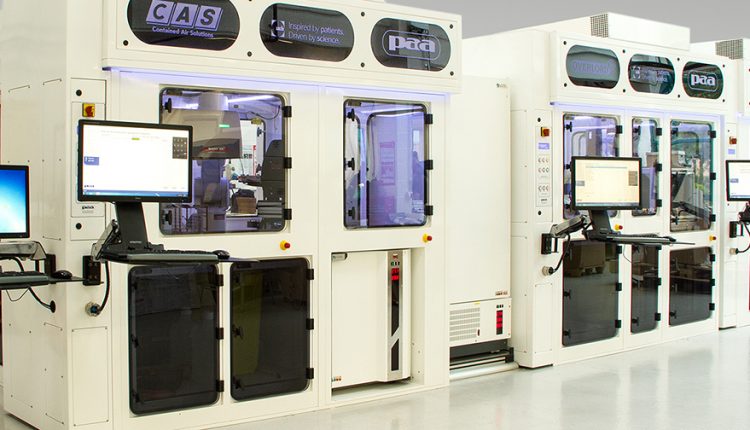 Life scientists use robots to test cells by the billion

An automated primary antibody screening workcell for early stage development of potential new treatments for central nervous system and immunology disorders has been designed and constructed for UCB S.A. by Peak Analysis and Automation (PAA). Built around a Mitsubishi Electric robot, the workcell speeds up the process of antibody discovery by allowing the screening of billions of antibody producing B cells.

UCB S.A. is a biopharmaceutical company headquartered in Brussels, Belgium, that focuses primarily on the research and development of neurological and immune system related medications. The company selected PAA for the development of an automated solution for vital cell screening processes that would not have been practical to achieve manually. PAA designs automated workcells for the pharmaceutical, biotechnology, healthcare and genomic research industries.

The sheer number of antibody subjects involved makes the process an ideal candidate for automation: the workcell operates by combining high-throughput cell culture screening and identification with the isolation of single antigen specific B cells using a proprietary technique known as the ‘fluorescent foci’ method.

The robot facilitates extremely efficient interrogation of the natural antibody repertoire. In a typical early stage screening campaign, a billion antibody producing B cells can be screened to find the ones with some of the desirable properties, a number that would be all but unimaginable if manual techniques were used.

Dr Malcolm Crook, a Technical Director at PAA, explained: “The workcell’s efficient sampling allows the fast discovery of those few antibodies which have required characteristics.”

With the workcell, the robot is used to seed the cells into barcoded 96-well tissue culture plates at a density between 500 and 5000 cells per well. A typical experiment may use up to 500 plates. The robot then moves the filled plates to an incubator station where the cells divide and produce antibody.

After a week’s incubation the plates are moved by the robot onto a conveyor so that they can be transferred onto a screening workcell. In the screening workcell the cell culture supernatant is sampled and transferred to an assay plate by the robot. A carefully designed homogeneous, plate based, fluorescent screening assay is used to identify wells containing an antibody specific to the target protein.

The plates are then transferred into the picking workcell where the positive-well cell culture supernatants are cherry picked by the robot and consolidated onto a barcoded master plate. Freezing media is added to the picked wells and the plate containing the cells is frozen down to -80°C. Further highly detailed analyzes follow, at which stage it is possible to collect the genes of the best individual antibodies and go on to discover and develop therapies for specific diseases.

A key benefit of the antibody discovery workcell for companies like UCB is that it reduces the time required to identify potential candidate antibodies compared to manual methods. Delivering useful starting points from which to allow subsequent discovery of therapies and treatments in the downstream antibody discovery process far more quickly than was previously possible. It also allows multiple projects to be carried out in parallel, thus addressing a broad spectrum of disease mediators.

The robot is a Mitsubishi Electric model RV7-FLM-D1-S15, a unit that is popular for a range of applications from life sciences and precision assembly to manufacturing and materials handling. It weighs in at less than 67kg, but can lift seven kilograms, has a reach of over 900mm and a positioning accuracy of 0.02mm. Its waist axis can rotate through ±240deg, which gives it an all-around working envelope. Significantly this robot model is rated to IP67, so can be used in demanding environments. It also offers very fast cycle times and has many safety features such as settable limits for speed, position and torque.

Crook concluded: “Only by starting with a very large number of cells is it possible to identify those few antibodies in early stage screening from which new treatments can be subsequently developed and only robotic automation makes this a viable process.”