IC Insights recently released its ‘Mid-Year Update to The McClean Report 2019’. The update included IC Insights’ ranking of the 33 largest IC product categories based on their expected sales and unit shipment volumes for 2019.

Despite a 38% sales decline expected this year, the DRAM market is forecast to remain the largest of all IC product categories again in 2019 with sales reaching $62.0 billion, down from $99.4 billion in 2018. IC Insights believes the DRAM market will account for 17% of total IC sales in 2019. By comparison, DRAM sales accounted for 23.6% of the total IC market in 2018. 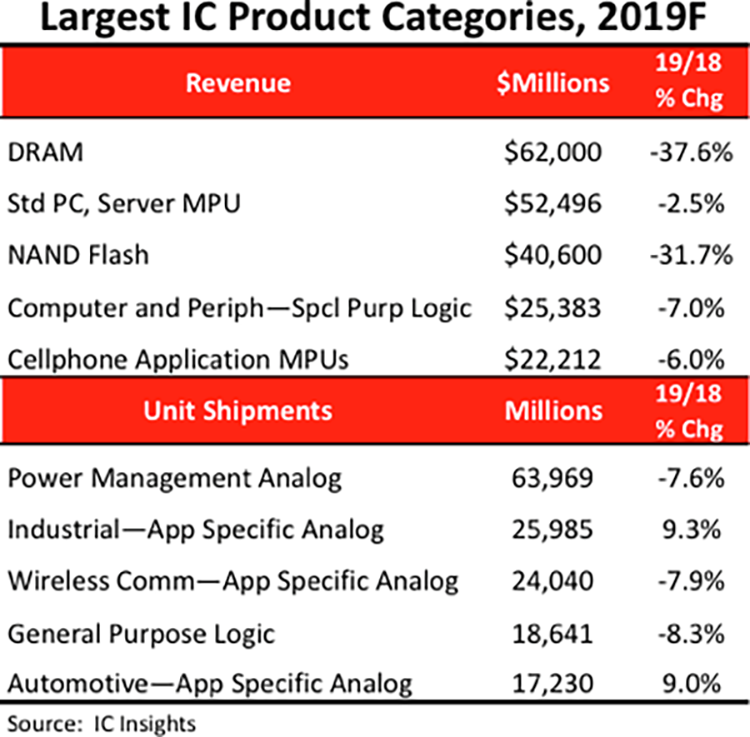 Over the past decade, DRAM typically accounted for 14-16% of IC sales and NAND flash memory about 11-12%, but tight supplies of those memories caused average selling prices to climb, which led to surging sales in both segments in 2017 and 2018. For the first time since the 1990s, DRAM revenues surpassed MPU sales in 2018.

Expected to replace NAND flash at the number two spot in 2019 is the large, mainstream category of microprocessors for traditional PCs, servers, large computers, and a wide range of embedded-processing applications. Sales in this MPU category climbed 11.0% in 2018 to a record-high $53.8 billion as PC shipments grew for the first time in five years, and strong demand raised server shipments to cloud-computing data centers and Internet-based businesses.

The nearly 2.5% slowdown expected in this MPU category for 2019 is mainly the result of a drop-off in global economic growth; uncertainty and market disruptions caused by the U.S.-China trade war, and an oversupply of inventory in data center servers after high growth in 2018.

Shipments of Automotive and Industrial Application-Specific Analog devices are each expected to rise at least nine percent this year, even as total analog units are forecast to slide five percent.

Hyperstone to present at the Flash Memory Summit 2019