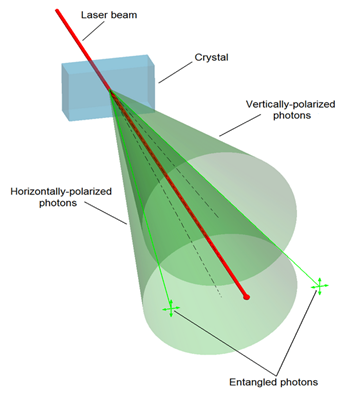 Pritzker School of Molecular Engineering, University of Chicago researchers, were funded and managed by DEVCOM, Army Research Laboratory’s Center for Distributed Quantum Information, also amplified an entangled state via the same cable. They used the cable to entangle two qubits in each of two nodes, then entangled the qubits further with other qubits in the nodes. The peer-reviewed journal published the research in its Feb. 24, 2021 issue.

The research paves the way for increasingly complex experiments with additional quantum nodes necessary for large-scale quantum networks and computers of interest to the Army. The researchers used superconducting qubits, tiny cryogenic circuits that can be manipulated electrically. Transferring entangled states is essential to scaling quantum computing. When two qubits are entangled and a measurement is made on one, it affects the outcome of a measurement made on the other, even if that second qubit is physically far away.

To send the entangled states through the one-meter-long superconducting cable, researchers created an experimental set-up with three superconducting qubits in each of two nodes. They connected one qubit in each node to the cable and then sent the fragile quantum states, in the form of microwave photons, through the cable with minimal loss of information.

The transfer process used, node to cable to node, takes only a few tens of nanoseconds, which allowed for very little information loss. The system also allowed them to amplify the entanglement of qubits. Researchers used one qubit in each node and entangled them together by sending a half-photon through the cable, then extending the entanglement to the other qubits in each node. At completion, all six qubits in two nodes were entangled in a single globally entangled state.

The researchers have a clear path forward for increasingly complex experiments which will enable the further exploration of distributed entanglement.