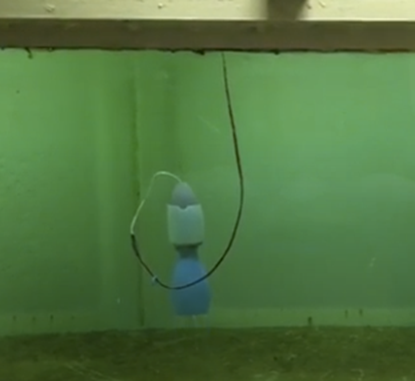 The University of Southampton and University of Edinburgh scientists developed a flexible underwater robot that propels itself through water using the same style as the Aurelia aurita jellyfish, the world’s most efficient swimmer. The use of the efficient and lightweight design and soft exterior may unlock new possibilities for underwater exploration.

Developed at the University of Southampton it is the first submersible to demonstrate the benefits of using resonance for underwater propulsion. Resonance is the large vibrations that occur when applying a force at the ideal frequency. The robot uses very little power but generates large water jets to push itself forward.

It is a rubber membrane enclosing eight 3D-printed flexible ribs, which together form a ‘propulsive bell.’ A small piston in the top half of the robot taps this bell repeatedly so that it expands and springs back to mimic a jellyfish’s swimming technique. Tests show that it is ten-to-fifty times more efficient than typical small underwater vehicles powered by propellers. This increased efficiency makes it ideal for operating near sensitive environments such as a coral reef, archaeological sites, or waters crowded with swimmers.

The team is now looking to extend the concept behind the robot to a fully autonomous underwater vehicle capable of sensing and navigating its environment.