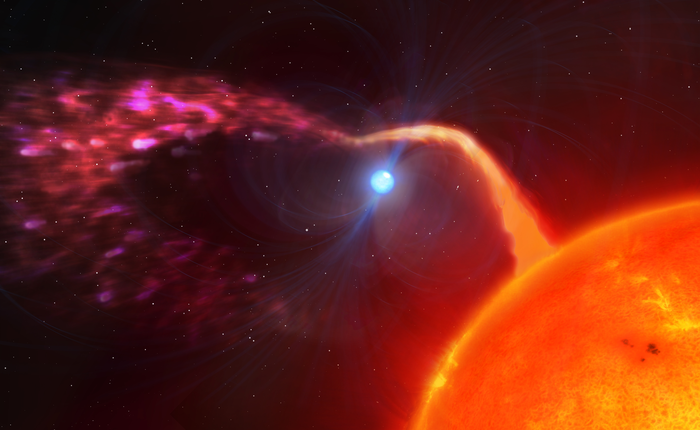 A team of astronomers led by the University of Warwick has discovered a white dwarf star spinning so quickly, that it breaks previous records. The star is also the second magnetic propeller found.

A white dwarf is what remains once a star, like our sun, exhausts its supply of nuclear fuel. These degenerate dwarves are very dense for their size, containing the mass of a star within the volume of a planet.

Not only does the white dwarf complete a full rotation in a record-breaking 25 seconds, about 20% faster than the last record-holder, but it is also an example of the magnetic propeller system, an extremely rare find. The next-fastest dwarf rotated fully in 29 seconds.

The propeller effect occurs in a binary system where the rapidly spinning dwarf pulls material from its companion body and flings it into space at high speeds. A small portion of the material is accreted, creating bright spots which rotate rapidly and allow researchers to detect the rotation period of the star.

The Warwick team used HiPERCAM, a super-sensitive instrument that was specially mounted on the largest functioning optical telescope in the world: Gran Telescopio  Canarias in La Palma, in order to time J0240+1952.

Can Working Out Reduce Your Chances of Getting Alzheimer’s?