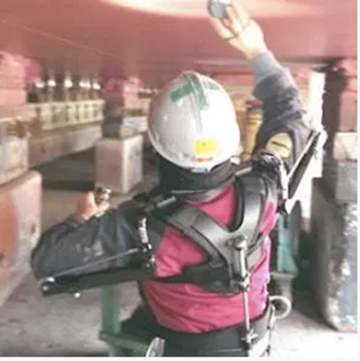 According to a study recently published in the journal Applied Ergonomics, exoskeletons worn by workers on assembly lines or in warehouses to alleviate stress on their lower back, may compete with valuable brain resources.

The study found that wearing exoskeletons while performing tasks that required them to think about their actions, their brains worked overtime and their bodies competed with the exoskeletons. The wearables may place enough burden on the brain that potential benefits to the body are negated.

The very limited study based on researchers asking 12 people – six men and six women – to repeatedly lift a medicine ball in two 30-minutes sessions. For one of the sessions, the participants wore an exoskeleton. For the other, they did not.

They asked those same participants to perform that same task – lifting a medicine ball for 30 minutes, in one session wearing an exoskeleton – but added a mental task: subtracting 13 from a random number between 500 and 1,000 each time they lifted the ball.

When those muscles compete with one another, the brain worked less efficiently and forces on the back increased, the researchers found. The study was conducted at Ohio State’s Spine Research Institute, in partnership with researchers from Texas A&M University. Co-authors on the study include Eric B. Weston from Ohio State, and Yibo Zhu and Ranjana K. Mehta from Texas A&M.