Renewables to Represent 30% of Total Installed Capacity by 2030

The contribution of renewable power to total installed capacity in the US is expected to double from 15% in 2018 to 30% by 2030, reaching a total of 442.8 gigawatt (GW). Representing a compound annual growth rate (CAGR) of 7.3%, this projection can be attributed to more states adopting and updating renewable energy policies, as well as imposed emission taxes increasing the cost of fossil fuel power generation, according to GlobalData, a leading data and analytics company.

Energy utilities in the US are also in favor of switching to renewable power as they must comply with the state renewable energy targets.

GlobalData’s latest report, ‘US Power Market Outlook to 2030, Update 2019 – Market Trends, Regulations and Competitive Landscape’, reveals that the share of coal-based capacity will decline from 27.2% in 2018 to 13.5% in 2030 as it is replaced by renewable energy, storage projects and stable gas-based generation in the near future.

Arkapal Sil, Power Industry Analyst at GlobalData, commented: “During 2019-2030, offshore wind capacity is set to see the largest growth rate among renewables reaching 11.7GW from 60 megawatt (MW) at a 62% CAGR, while solar photovoltaic (PV) capacity is expected to reach 220GW from 75.3GW, growing at a ten percent CAGR.” 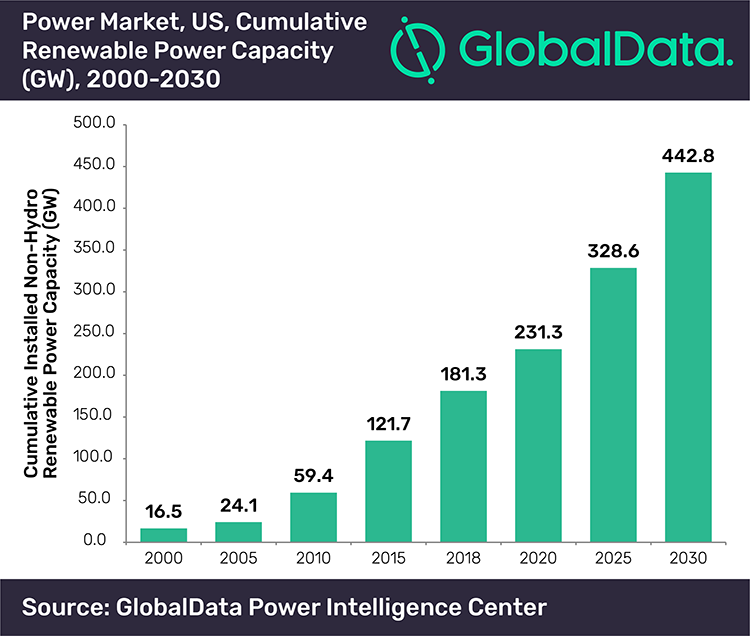 The onshore wind segment, which registered a growth of 22% CAGR during 2000-2018 (reaching 96.3GW), will witness a steady growth of five percent CAGR over the forecast period to reach 185.5GW in 2030 and account for 12% of overall generation mix compared to eight percent in 2018.

Sil added: “Biopower, geothermal and solar thermal segments are expected to jointly grow at an average of three percent CAGR over the forecast period. Increased renewable capacity addition will open up new markets for wind turbines, modules for solar plants and associated equipment required for transmitting the generated power to the grid.”

Renewable capacity expansion will necessitate grid modernization in order to manage a high volume of renewable energy with inherent variability. This, in-turn, will involve huge investment in grid infrastructure and open up new markets for energy storage systems to enable a steady supply of power when adequate renewable energy is unavailable. GlobalData estimates that the battery storage market in the US is expected to reach around $5bn in 2030.

Sil concluded: “The increased cost of nuclear power due to higher safety standards will result in a slight decline in the nuclear capacity during the forecast period. As a result, gas-based power will dominate the generation mix, accounting for 41% of installed capacity, and catering to the country’s base-load power requirement in 2030.”

Ready to Use Partner Solutions from RA Microcontroller Ecosystem

How to Limit IT Damages Caused by Power Surges

Solutions for the integrated smart factory