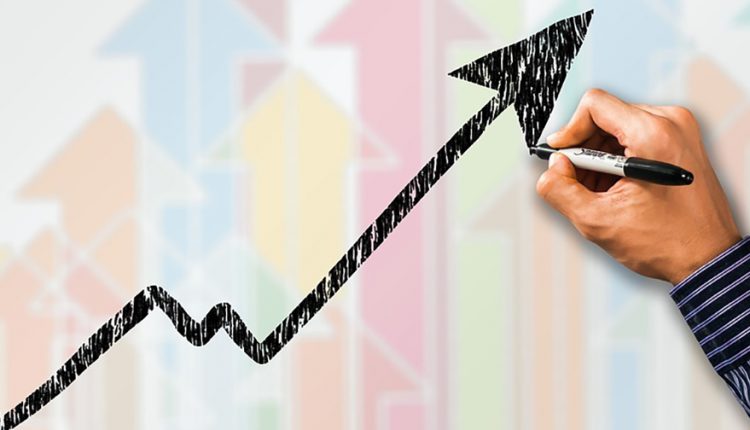 Due partly to higher capital expenditures – such as for the purchase of the previously leased production building in Hungary – and volume-driven higher net working capital, free cash flow was CHF 0.5 million (PY: CHF 5.0 million). Spending on research and development was CHF 16.9 million (PY: CHF 16.7 million).

Schaffner achieved growth in every region in fiscal 2017/18. The largest increase was recorded in Europe, where sales rose by 20%, bringing this region’s share of the Schaffner Group’s sales to 45% (PY: 42%). With sales growth of nine percent, Asia represented 35% (PY: 36%) of the consolidated sales figure. Sales in North America were up five percent and accounted for 20% (PY: 22%) of the Group total.

Schaffner’s revenue base in its core markets is broad. Sales of products for energy-efficient drive systems grew by 27% in the year and made up 23% (PY: 20%) of Group sales, followed by automotive electronics with a share of 22% (PY: 24%) and power supplies for electronic devices at a share of 14% (PY: 15%). Rail technology sales expanded by 30% and this core market was responsible for 13% of Group sales (PY: 12%). Sales in the machine tools and robotics sector likewise constituted 13% (PY: 15%) of the Group total.

The EMC division won various substantial projects in fiscal 2017/18 against competition from significant rivals and further strengthened its leading position in the global market for EMC filters. Its sales grew by a vigorous 18% to CHF 115.9 million (PY: CHF 98.3 million). Order intake went up from CHF 102.2 million to CHF 116.7 million. Segment profit grew by a disproportionately rapid 33% to a new total of CHF 17.8 million (PY: CHF 13.3 million).

In the Power Magnetics division, the turnaround made significant progress. Despite a poor start to the year in North America, the segment’s sales in fiscal 2017/18 were pushed up by 13% to CHF 56.6 million (PY: CHF 50.0 million). The growth came mainly from Europe and Asia. Demand was particularly good in the core market of rail technology.

The division’s order intake grew by 17% to CHF 57.8 million (PY: CHF 49.4 million). The renegotiation of supply contracts with previously unsatisfactory margins was largely completed. The segment result remained affected, however, by one-off costs related to the restructuring; on balance, the Power Magnetics division registered a segment loss of CHF 5.5 million (PY: loss of CHF 7.0 million), with a segment profit margin of -9.7% (PY: -13.9%).

Schaffner is completing the restructuring of the Power Magnetics division in the first half of 2018/19 and expects to reach break-even in the second half of the fiscal year.

In fiscal year 2017/18 the Automotive division increased its sales by three percent to CHF 49.0 million (PY: CHF 47.4 million). Order intake grew by two percent to a new total of CHF 49.0 million (PY: CHF 47.9 million). Strong growth was recorded in Europe in the year under review, while demand declined slightly in the second half of the year in Asia.

Segment profit rose to CHF 11.3 million (PY: CHF 9.4 million), reflecting one-off effects from insurance benefits after the fire at the plant in Thailand. The segment profit margin was 23.1% (PY: 19.9%). Adjusted for the one-time effects, the margin measured 18.2%. Factors detracting from the margin were shifts in the product mix (mainly due to the regional distribution of orders) as well as an unfavorable currency trend.

The Schaffner Group has started fiscal year 2018/19 with a good order backlog. Although the momentum is likely to be lower than in fiscal 2017/18 due to rising uncertainty in global markets and the trade dispute between the USA and China, and price pressure will probably continue, the Group is aiming for further growth, given steady foreign exchange relations.

For the current new fiscal year, Schaffner plans further, forward-looking investments in the expansion of the business segments. The medium-term target of organic sales growth of five percent per year on a multi-year average basis remains in place. With the imminent completion of the Power Magnetics division restructuring, Schaffner is setting the medium-term target range for the Group’s EBIT margin at eight to ten percent and currently expects to already reach this target in this fiscal year. 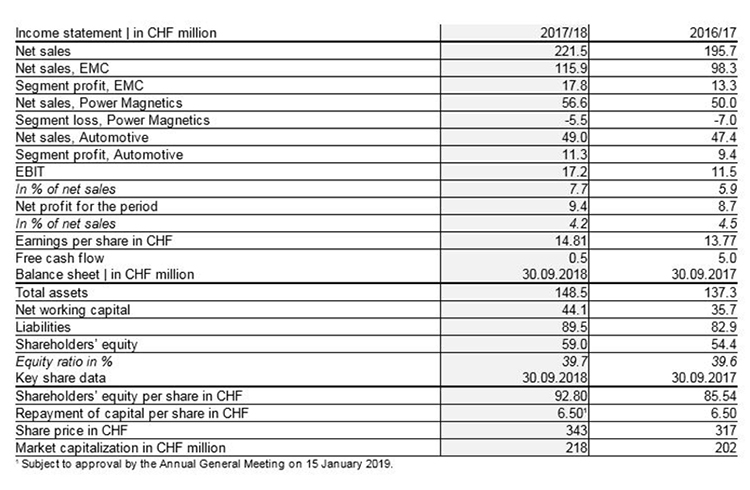