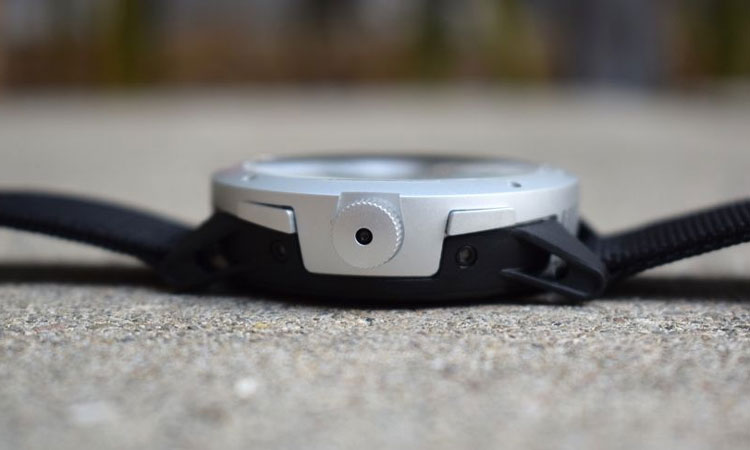 The Matrix PowerWatch Uses Body Heat As A Power Source

The Matrix PowerWatch doesn’t come with a charger in the box because you already own one; it’s your arm. Created by PHD students at the California Institute of Technology who were working on thermoelectrics, the smartwatch turns body heat into electricity, so that – save for finding yourself on the wrong side of the Corleone family – you’ll never be without your smartwatch charger again. The dream.

Matrix claims to be the first to have achieved this, and indeed the promise of body heat-powered tech has continued to elude us, despite being told time and time again how we’re oh so close. In watches, Seiko came closest with its Thermic watch back in the 1990s, but it was far from a success and according to Matrix lacked the PowerWatch’s secret sauce: the boost converter.

This component boosts the 100mV coming out of the thermoelectrics to 3 or 4 volts, which then powers the circuitry. This works due to a difference in the temperature between your skin and the air around you, and the watch sill always show you the temperature of your skin relative to that of the case.

“This is probably the hardest thing we could have done, because we had to shrink the technology down and also make it look good,” said Akram Boukai, CEO of Matrix. “And the wrist is the worst place to harvest heat.”

If your skin is warmer than your surrounding environment, you’ll produce power that’s then stored in the lithium-ion battery. The greater the inequality between the skin and outside temperature, the more energy you’ll make; sitting in a snowstorm layered in thermals would create crazy amounts of energy, for example.

But you won’t have to brave a blizzard to charge the PowerWatch; Boukai said general daily use should be enough to keep it going, as long as you’re not sitting in a really warm room all day. So far my skin temperature has stayed above that of the case, even if just by a small amount, and all I’ve mostly been sitting at my desk. “A lot of skeptics would never believe you could maintain a temperature difference,” he said.

Matrix is off to a good start too, having surpassed its Indiegogo target earlier this year by almost 1000%. Boukai said Matrix has already sold $2m worth of pre-orders, which are going for $169.

But what does the PowerWatch actually do? Not an awful lot, yet. The regular version, which looks like something you’d expect Garmin to make, down to the exposed screws, tracks steps, calories, distance travelled, and sleep. This is all done with accelerometer data – there’s no heart rate or GPS – but calories are calculated taking body heat into account. That should make for a more accurate measurement. Trackers tend to calculate calories by feeding information on your weight, height etc into an algorithm and combining it with the accelerometer.

“The most accurate way to measure calorie loss is through heat loss through your body,” said Boukai, “because all the calories you consume eventually get converted to heat.

Boukai said he thinks Matrix can carve out a niche for those people who just want basic metrics but don’t want the hassle of charging. There will be another version of the watch, the PowerWatch X, which will be 4mm larger, waterproof to 200m (the standard one is to 50m) and also handle notifications. The regular PowerWatch measures 46mm, so it’s already going to be too large for some, but the thermoelectric tech prevents Matrix from making these smartwatch any smaller right now. Boukai said Matrix is already plotting out the second-generation device, planned for late 2018, which will add a color screen and either heart rate or GPS information. It should also be four times more efficient, he said, which may mean a smaller profile.

“In our second generation watch the direction of the temperature difference won’t matter – we’ll have a bipolar boost converter.”

Boukai re-emphasized that the wrist is a poor place to produce this heat, adding that the head would be a more ideal location for thermoelectric tech to work. “You’re about 100W when you’re sitting down and 50% of it is in your head,” he said. Matrix has been thinking about how it could use this tech in wireless earbuds and hearables, even hearing aids. Augmented reality glasses, for which battery life is a major impediment, could also benefit.

It’s hard to say until we’ve tested it properly, but right now the PowerWatch feels like a device that’s both incredibly impressive and limited at once. As far as its smartwatch/fitness features go it’s about five years old, yet the eternal battery technology feels really revolutionary. It’s a weird contrast.

Expect to hear release data information soon. In the mean time, we’ll be testing it out, and we’ll be sure to let you know how we get on.

The Light Phone Will Stop Us All Being ‘Mindless Zombies’