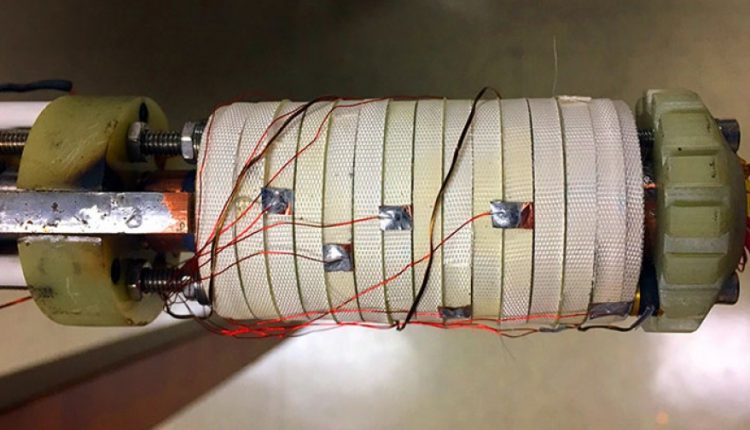 And according to the team, this is just the beginning. By packing an exceptionally high-field magnet into a coil you could pack in a purse, MagLab scientists and engineers have shown a way to build and use electromagnets that are stronger, smaller and more versatile than ever before.

“We are really opening a new door,” said MagLab engineer Seungyong Hahn, the mastermind behind the new magnet and an associate professor at the FAMU-FSU College of Engineering. “This technology has very good potential to entirely change the horizons of high-field applications because of its compact nature.”

The new magnet is nowhere near the size of the conventional ones marking a miniaturization milestone that could change magnetics in the same way silicon has changed electronics.

The miniature magnet created by Hahn and his team generated a world-record 45.5-tesla magnetic field. A typical hospital MRI magnet is about 2 or 3 teslas, and the strongest, continuous-field magnet in the world is the MagLab’s own 45-tesla hybrid instrument, a 35-ton behemoth that has maintained that record since 1999.

The 45-T, as it is called, is still the world’s strongest working magnet, enabling cutting-edge physics research into materials. But in a test, the half-pint-sized magnet invented by Hahn, tipping the scales at 390 grams (0.86 pounds), briefly surpassed the reigning champ’s field by half a tesla, a compelling proof-of-concept.

How could something so small create a field that big? By using a promising, new conductor and a novel magnet design.

Both the 45-T magnet and the 45.5-T test magnet are built in part with superconductors, a class of conductors boasting special properties, including the ability to carry electricity with perfect efficiency.

The superconductors used in the 45-T are niobium-based alloys, which have been around for decades. But in the 45.5-T proof-of-principle magnet, Hahn’s team used a newer compound called REBCO (rare earth barium copper oxide) with many advantages over conventional superconductors.

Notably, REBCO can carry more than twice as much current as a same-sized section of niobium-based superconductor. This current density is crucial: After all, the electricity running through an electromagnet generates its field, so the more you can cram in, the stronger the field.

Today’s electromagnets contain insulation between conducting layers, which directs the current along the most efficient path. But it also adds weight and bulk.

Instead, Hahn developed a superconducting magnet without insulation. In addition to yielding a sleeker instrument, this design protects the magnet from a malfunction known as a quench. Quenches can occur when damage or imperfections in the conductor block the current from its designated path, causing the material to heat up and lose its superconducting properties. But if there is no insulation, that current simply follows a different path, averting a quench.

Since the turns of the coil are not insulated from each other, they can share current very easily and effectively in order to bypass any of these obstacles.

There’s another slimming aspect of Hahn’s design that relates to quenches: Superconducting wires and tapes must incorporate some copper to help dissipate heat from potential hot spots. His “no-insulation” coil, featuring tapes a mere 0.043-mm thick, requires much less copper than do conventional magnets.

With the guidance of veteran MagLab engineer Iain Dixon, the team built three increasingly powerful prototypes in quick succession that became known as the Little Big Coil (LBC) series. Along the way, they refined, solved problems and used ever-better superconductors.

The search for answers took the team to the cutting edge of technology — quite literally.

Due to production constraints, REBCO tapes are manufactured at a specific width —12 mm, or about half an inch. To meet the LBC’s requirements, however, those tapes had to be cut lengthwise to 4 mm wide.

That’s difficult to do, even with the greatest care, because REBCO is quite brittle. As a result, the sides of the tape that had been slit were vulnerable to cracking under the mechanical stress of high magnetic fields.

To further the project, more research and troubleshooting will take place. Hahn’s LBC design is currently being considered for use in a potentially record-busting future superconducting magnet that is now in research and development funded by the National Science Foundation.