You’re hurrying home from work and realize you don’t have anything defrosted for dinner. You stop at the grocery store and pick up a pre-packaged meal, along with some pre-cut vegetables, housed in a black plastic tray and covered with plastic wrap. That pre-cut melon looks tasty, too, so you toss it in the cart.

Pleased with your somewhat healthy, spur-of-the-moment supper, you don’t think about the environmental impact of those black plastics, which are probably destined for the landfill.

Black plastics, unlike many other plastics, aren’t easily recyclable using today’s technology. But a group of researchers out of Swansea University rated one of the United Kingdom’s top 10 greenest universities, may have discovered a solution.

Plastics commonly used in food packaging can be recycled to create completely new materials, used for things like electrical wires.

The research, published in The Journal for Carbon Research, focuses on chemical recycling which uses the constituent elements of the plastic to make new materials.

While all plastics are made of carbon, hydrogen and sometimes oxygen, the amounts and arrangements of these three elements make each plastic unique. As plastics are very pure and highly refined chemicals, they can be broken down into these elements and then bonded in different arrangements to make high-value materials such as carbon nanotubes. 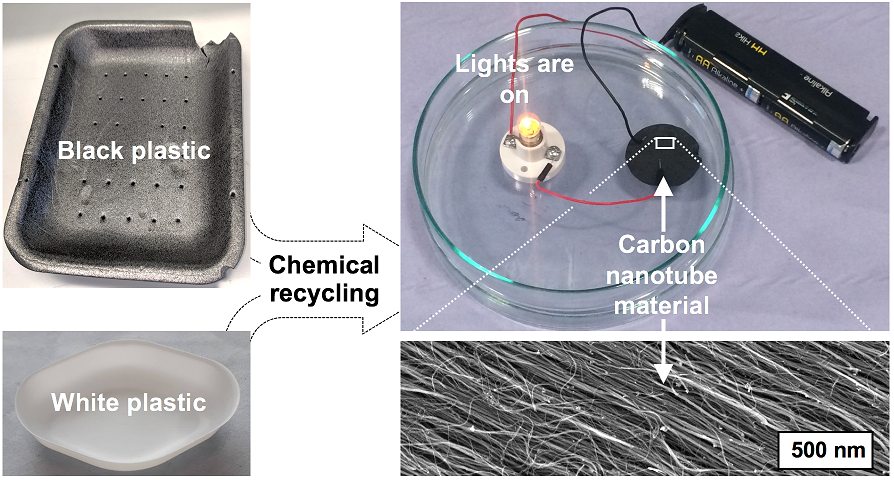 Most importantly, they can be used to create electrical wires that can expedite the transmission and distribution of renewable energy across the world.

During the study, the research team tested black plastics by removing the carbon and then constructing nanotube molecules from the bottom up using the carbon atoms. The team used the nanotubes to transmit electricity to a light bulb in a small demonstrator model.

The research team plans to make high purity carbon electrical cables using waste plastic materials, improving the nanotube material’s electrical performance and increasing the output so they are ready for large-scale deployment in the next three years.

White said, “The research is significant as carbon nanotubes can be used to solve the problem of electricity cables overheating and failing, which is responsible for about 8% of electricity is lost in transmission and distribution globally.”

He continued, “Many long-range cables, which are made of metals, can’t operate at full capacity because they would overheat and melt. This presents a real problem for a renewable energy future using wind or solar because the best sites are far from where people live.”

How Scientists Find Inspiration in Nature

Taking Self-Driving Car Technology from the Road to Space

Taking Self-Driving Car Technology from the Road to…