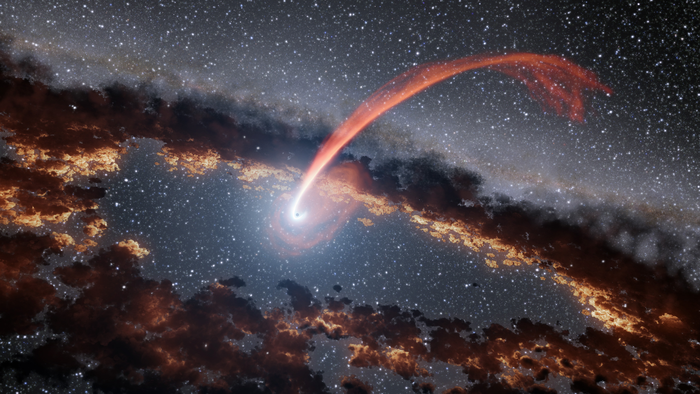 Just a black hole munching on a star

When a black hole consumes a star, it produces a “tidal disruption event.” The shredding of the star causes an outburst of radiation that can outshine the combined light of every star in the black hole’s host galaxy for months, or even years.

A team of astronomers led by Sixiang Wen, a postdoctoral research associate at the University of Arizona Steward Observatory, used x-rays emitted by a tidal disruption event to make the first measurements of a black hole’s mass and spin. This intermediate-mass black hole has long eluded observation. The results of their paper is published in The Astrophysical Journal.

Reanalyzing the x-ray data used to observe the J2150 flare, and comparing it with sophisticated theoretical models, the ream demonstrated that this flare originated from an encounter between an unlucky star and an intermediate-mass black hole. The intermediate black hole weighed roughly 10,000 times the mass of the sun.gd

According to Zabludoff, the measurement of J2150’s spin holds clues as to how black holes grow, and possibly to particle physics. This one has a fast spin, but not the fastest possible. The spin measurement allows astrophysicists to test hypotheses about the nature of dark matter, which may consist of unknown elementary particles not yet seen in laboratory experiments.