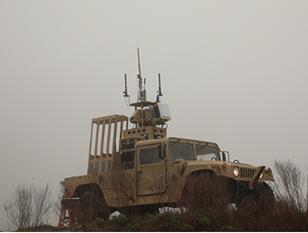 The demonstration was successfully in neutralizing tactically relevant drones using new X-band radar that automatically senses and identifies unmanned aerial system threats. The radar pairs targets to specific interceptors through an automated decision engine tied to a command, and control system and launches rotary and fixed wing interceptors with two types of drone countermeasures while moving, and without operator intervention.

The primary drone negation mechanism shoots strong, stringy streamers from reusable interceptors that interfere with propellers causing loss of propulsion. The development of an integrated solution of sensors, autonomy, and mitigation solutions was more robust than existing systems. Dynetics was the primary systems integrator.