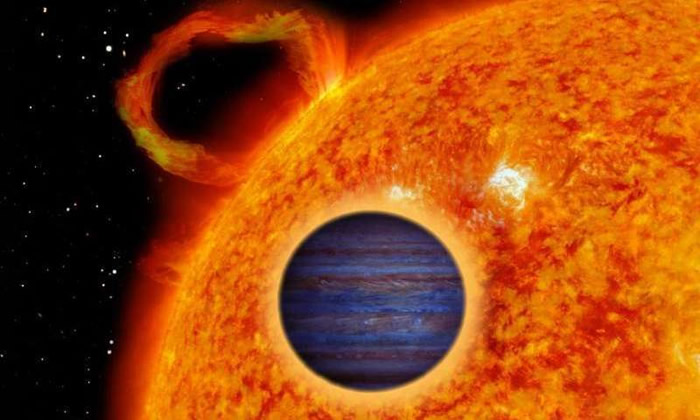 EPIC 220504338b was first spotted by K2 as a planetary candidate during the spacecraft’s Campaign 8 in mid-2016. To confirm it as a planet, a team of researchers led by Nestor Espinoza of the Pontifical Catholic University of Chile conducted follow-up observations using ESO’s Fibre-fed, Extended Range, Échelle Spectrograph (FEROS) at La Silla Observatory in Chile. FEROS observational campaign was carried out in August and November 2016.

Recent FEROS spectroscopic observations allowed the team to perform radial velocity measurements that confirmed EPIC 220504338b is a dense “hot Jupiter” transiting a solar analogue as well as provided initial stellar parameters of its host star.

“In this work, we have presented the discovery of EPIC 220504338b, a new hot Jupiter orbiting a metal-rich solar analogue discovered using photometry from Campaign 8 of the K2 mission and follow-up radial velocities using the FEROS spectrograph,” the scientists wrote in the paper.

The so-called ‘hot Jupiters’ like EPIC 220504338b are gas giant planets, similar in characteristics to the solar system’s biggest planet, with orbital periods of less than 10 days. They have high surface temperatures, as they orbit their parent stars very closely.

According to the research, EPIC 220504338b is about 10% smaller than Jupiter and approximately 30% more massive. The exoworld orbits its 6-billion-year-old sun-like parent star every 5.8 days. Notably, with a density of nearly 2.1 gr/cm3 and an equilibrium temperature of about 1,160 K, the planet is one of the densest ‘hot Jupiters’ below two Jupiter masses known to date.

The researchers explain the newly discovered planet’s mass and radius by the amount of heavy elements in the planet, which should be on the order of at least 110 Earth masses.

The team also derived fundamental parameters of the host star EPIC 220504338. The observations indicate that this star has a mass to that of the sun, with a radius of about 1.05 solar radii. It is also approximately 23% more dense than the sun.

However, EPIC 220504338 shows a high metallicity, which significantly deviates from the sun. Therefore, this star was classified as a slightly metal-rich solar analogue.