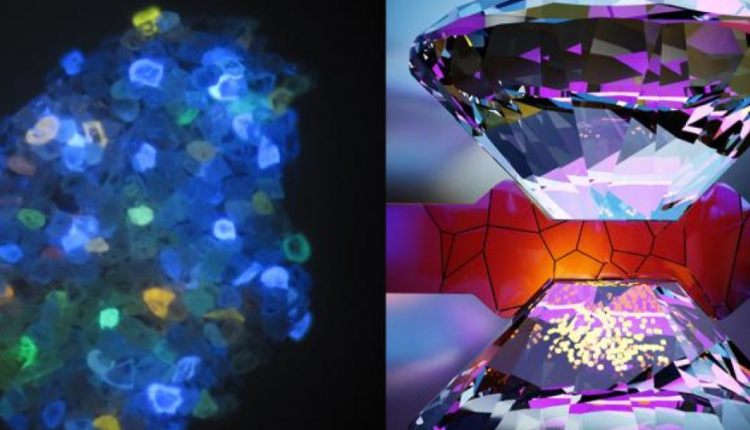 From helping in the search for life on exoplanets to triggering chemical reactions, diamond anvil cells have been called “scientific workhorses.”

Whether helping scientists recreate extreme phenomena or enabling chemical reactions that can only be triggered by intense pressure, DACs are laboratory apparatus you can safely hold in the palm of your hand.

To develop new, high-performance materials, scientists need to understand how useful properties, such as magnetism and strength, change under such harsh conditions. But often, measuring these properties with enough sensitivity requires a sensor that can withstand the crushing forces inside a diamond anvil cell.

Since 2018, scientists at the Center for Novel Pathways to Quantum Coherence in Materials (NPQC), an Energy Frontier Research Center led by the U.S. Department of Energy’s Lawrence Berkeley National Laboratory (Berkeley Lab), have sought to understand how the properties of electronic and optical materials can be harnessed to develop ultrasensitive sensors capable of measuring electric and magnetic fields.

Now, a team of scientists led by Berkeley Lab and UC Berkeley, with support from the NPQC, have come up with a clever solution: By turning natural atomic flaws inside the diamond anvils into tiny quantum sensors, the scientists have developed a tool that opens the door to a wide range of experiments inaccessible to conventional sensors. Their findings, which were reported in the journal Science, have implications for a new generation of smart, designer materials, as well as the synthesis of new chemical compounds, atomically fine-tuned by pressure.

At the atomic level, diamonds owe their sturdiness to carbon atoms bound together in a tetrahedral crystal structure. But when diamonds form, some carbon atoms can get bumped out of their “lattice site,” a space in the crystal structure that is like their assigned parking spot. When a nitrogen atom impurity trapped in the crystal sits adjacent to an empty site, a special atomic defect forms: a nitrogen-vacancy (NV) center.

Over the last decade, scientists have used NV centers as tiny sensors to measure the magnetism of a single protein, the electric field from a single electron, and the temperature inside a living cell, explained Norman Yao, faculty scientist in Berkeley Lab’s Materials Sciences Division and assistant professor of physics at UC Berkeley.

To take advantage of the NV centers’ intrinsic sensing properties, Yao and colleagues engineered a thin layer of them directly inside the diamond anvil in order to take a snapshot of the physics within the high-pressure chamber.

After generating a layer of NV center sensors a few hundred atoms in thickness inside one-tenth-carat diamonds, the researchers tested the NV sensors’ ability to measure the diamond anvil cell’s high-pressure chamber.

The sensors glow a brilliant shade of red when excited with laser light; by probing the brightness of this fluorescence, the researchers were able to see how the sensors responded to small changes in their environment.

What they found surprised them: The NV sensors suggested that the once-flat surface of the diamond anvil began to curve in the center under pressure.

Co-author Raymond Jeanloz, professor of earth and planetary science at UC Berkeley, and his team identified the phenomenon as “cupping,” a concentration of the pressure toward the center of the anvil tips.

“They had known about this effect for decades but were accustomed to seeing it at 20 times the pressure, where you can see the curvature by eye,” Yao said. “Remarkably, our diamond anvil sensor was able to detect this tiny curvature at even the lowest pressures.”

There were other surprises, too. When a methanol/ethanol mixture they squeezed underwent a glass transition from a liquid to a solid, the diamond surface turned from a smooth bowl to a jagged, textured surface. Mechanical simulations performed by co-author Valery Levitas of Iowa State University and Ames Laboratory confirmed the result.

“This is a fundamentally new way to measure phase transitions in materials at high pressure, and we hope this can complement conventional methods that utilize powerful X-ray radiation from a synchrotron source,” said lead author Satcher Hsieh, a doctoral researcher in Berkeley Lab’s Materials Sciences Division and in the Yao Group at UC Berkeley.

In another experiment, the researchers used their array of NV sensors to capture a magnetic snapshot of iron and gadolinium.

Magnetic metals that when compressed can alter from a magnetic phase to a nonmagnetic phase, iron and gadolinium undergo a “pressure-induced phase transition.” In the case of iron, the researchers directly imaged this transition by measuring the depletion of the magnetic field generated by a micron-size (or one millionth of a meter) bead of iron inside the high-pressure chamber.

In the case of gadolinium, the researchers took a different approach. In particular, the electrons inside gadolinium “happily whiz around in random directions,” and this chaotic “mosh pit” of electrons generates a fluctuating magnetic field that the NV sensor can measure, Hsieh said.

The researchers noted that the NV center sensors can flip into different magnetic quantum states in the presence of magnetic fluctuations, much like how a compass needle spins in different directions when you wave a bar magnet near it.

So they postulated that by timing how long it took for the NV centers to flip from one magnetic state to another, they could characterize the gadolinium’s magnetic phase by measuring the magnetic “noise” emanating from the gadolinium electrons’ motion.

They found that when gadolinium is in a non-magnetic phase, its electrons are subdued, and its magnetic field fluctuations hence are weak. Subsequently, the NV sensors stay in a single magnetic quantum state for nearly a hundred microseconds.

Conversely, when the gadolinium sample changed to a magnetic phase, the electrons moved around rapidly, causing the nearby NV sensor to swiftly flip to another magnetic quantum state.

This sudden change provided clear evidence that gadolinium had entered a different magnetic phase, Hsieh said, adding that their technique allowed them to pinpoint magnetic properties across the sample with submicron precision as opposed to averaging over the entire high-pressure chamber as in previous studies.

The researchers hope that this “noise spectroscopy” technique will provide scientists with a new tool for exploring phases of magnetic matter that can be used as the foundation for smaller, faster, and cheaper ways of storing and processing data through next-generation ultrafast spintronic devices.