Semi Content in Electronic Systems Forecast to Drop to 26.4% in 2019

In its upcoming Mid-Year Update to The McClean Report 2019 (to be released at the end of July), IC Insights forecasts that the 2019 global electronic systems market will grow 4% to $1,680 billion. In contrast, the worldwide semiconductor market is expected to drop by 12% this year to $443.8 billion after exceeding the $500bn level for the first time last year.

If the 2019 forecasts come to fruition, the average semiconductor content in an electronic system will drop to 26.4% after setting the all-time record of 31.1% last year.

With global unit shipments of cellphones, automobiles, and PCs showing maturity and slowing over the past 10 years, the disparity between the three percent 2008 to 2018 CAGR registered in the electronic systems market and the seven percent 2008 to 2018 CAGR displayed by the semiconductor market is directly due to the increased content/value of semiconductors in electronic systems. 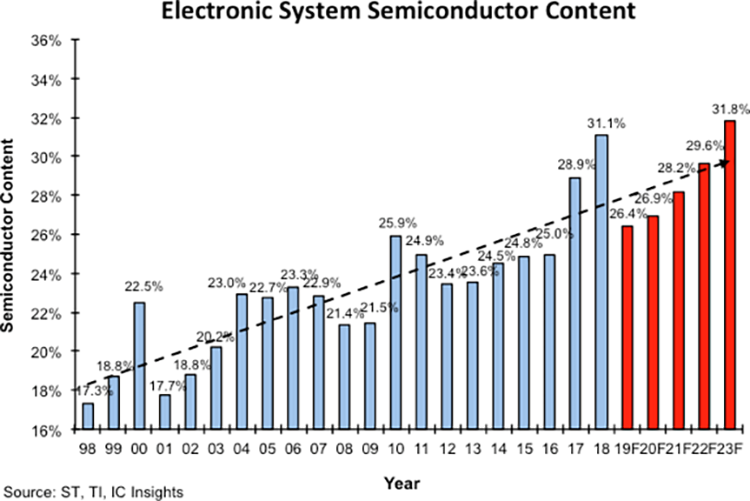 The memory IC ASP jump experienced over the past two years (56% in 2017 and 29% in 2018) is expected to reverse itself this year (-33%) and bring the semiconductor content percentage down with it. However, beginning in 2020, the semiconductor content percentage figure is expected to once again resume its climb and eventually reach a new high of 31.8% in 2023.

Whatever the ultimate ceiling is, once it is reached, the average annual growth for the semiconductor industry will closely track that of the electronic systems market (i.e., about four to five percent per year).

How to Develop Inertial Navigation Applications for CAN BUS

Modernization of Military Aircraft to Sustain Demand for EW Systems

Robot Dexterity Modeled on Sea Anemones Rather Than Human Hands

Modernization of Military Aircraft to Sustain Demand for…