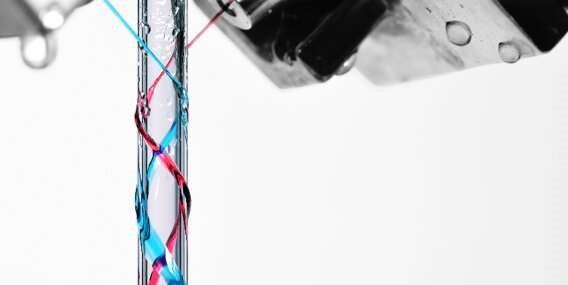 The Secret to More Efficient 3D Printing Could Lie in Tea

It may seem like a silly problem; you’re pouring a cup of tea from a teapot or a glass of wine from a bottle or carafe and you spill some. Pouring liquids is difficult because they tend to cling to the bottle or the teapot spout rather than flowing directly into your glass or cup.

Solving this problem may not seem like a great accomplishment for scientists but, in fact, figuring out why the so-called “teapot effect” occurs and how to prevent it could lead to advances in many industrial processes, including 3D printing.

A team of scientists from the University of Amsterdam, University of Twente and Saxion University of Applied Sciences recently made a discovery that takes us one step closer to solving the teapot effect by using it to form liquid helices. Their results were published in Physical Review Letters.

Despite its ubiquity, understanding the teapot effect has proven particularly difficult. Almost three centuries after the first study, it is currently accepted that the adhesion between the liquid and the solid comes from the combination of wetting and the presence of a depression in the fast turning liquid – similar to the one above airplane wings that allows the plane to fly. However, no theory has been able to capture exactly when the clinging occurs.

By shooting jets of water onto vertical cylinders, the researchers observed that the liquid can cling to the cylinder, just like it clings to your teapot. Because of the clinging effect, the water swirls around the cylinder to form a helix. By modeling the helix shape and how it is formed, the team was then able to predict the exact clinging behavior for the first time.

Because 3D printing and other industrial processes involve a liquid stream detaching from a solid, the discovery could help streamline pouring processes and make 3D printing more efficient.

Story via University of Amsterdam.

Advance the Technical Boundaries of Additive Manufacturing in the U.S.

3D Printed Precision Microscopes for US$18

The Rise of 3D Printing Across Different Sectors